In the lead up to the Counter Terror Expo in April 2010, Corporate Watch is taking a closer look at the companies helping to create, and profiting from, the terror/security culture (see the previous article). The trade fair, which is taking place at Kensington Olympia in London, is an opportunity to make huge profits for any company that can link its products to Western governments’ ‘wars on terror’. Amongst the 250 exhibitors are several companies developing security systems using biometric technologies and increasingly oppressive surveillance systems, bidding for lucrative contracts to create state-of-the-art security systems, for both state agencies and private clients.
G4S Technology
This time, we focus on G4S Technology (formerly known as G4Tec), the research and development arm of the notorious private security giant G4S (formerly Group 4). G4S’s existing endeavours include the management of privatised immigration detention centres worldwide, including three in the UK. G4S’s repertoire of ‘services’ also features privatised prison management; pre-deployment training for US armed forces; pipeline protection in Kazakhstan; operating UK police custody centres and cash management of over £59billion a year for commercial UK banks. A wealth of abuse claims have been levelled at G4S regarding their treatment of migrant detainees, alongside campaigns by activist groups such as No Borders and Stop Deportations, pointing out the inherent abuse in profiting from the detention of vulnerable people without charge or trial.
Hashmira

In addition to the services offered under the name G4S, the company also owns 70% of Israel’s largest private security company, Hashmira. The latest available figures show that the company achieved a turnover of USD 200million in 2005. Although it also offers maintenance and janitorial services, Hashmira is mainly a provider of security manpower and equipment. The company is heavily involved in the Israeli occupation of Palestine, supplying body and luggage scanners for checkpoints in the West Bank. In addition to its vital role within, and profit from, the Israeli apartheid system, Hashmira has a stunning track record of ignoring or violating the employment rights of its workers. The company was sued by 350 of its employees in 2005 for breach of labour laws, and was ordered to pay compensation to a former employee for non-payment of pension moneys by the Nazareth Labour Court in 2006.
Hashmira has repeatedly come under fire from Israeli workers’ rights organisation KavLaOved, with the group’s attorney, Eran Golan, stating that “the company violates its employees’ rights on a regular basis.” In 2008, Hashmira was convicted by an Israeli Regional Labour Court of discriminating on the basis of gender and religion against a female Jewish job applicant, having told her “there is a problem to carry weapon and magazines while wearing a skirt.” Despite these legal breaches and several investigations over the years, Hashmira has continually had its operating license renewed by the Knesset and, in 2009, it was awarded a NIS 7million (£1,14 million) contract to supply security at all Israeli prisons and police custody centres. More information about Hashmira’s activities and the legal complaints made against the company can be found at www.kavlaoved.org.
Symmetry Control System
G4S Technology’s main business seems to rest on its Symmetry Access Control system, a fully integrated security system that can be adapted to include biometric technology and video management. Unlike many of its corporate counterparts, G4S plays less heavily on the elitist glamour of high-tech security systems, painting itself more as a hardcore defender of assets and premises against inevitable peril.
G4S Technology’s marketing strategy is almost absurd. The company has a very long list of industries requiring ‘security solutions’ and everything, from prisons to publishing to retail, attracts almost exactly the same approach: “In today’s society security… is a high priority.” Far from any genuine desire to protect lives or, as the company so proudly claims, “in some cases pre-empt[ing] crime,” G4S Technology is simply carpet bombing, hoping to hit any industry with which the words ‘major security concerns’ do not sound too ridiculous. Rather ironically, G4S Technology is marketing its individual, tailor-made solutions with almost identical spiels for every industry it offers its services to.

An ever-expanding market
Fear is, of course, a powerful and insidious marketing tool. But more than that, G4S is playing a major part in creating a perceived societal understanding that has made constant and imminent threat an indisputable fact. Confronted as they are with a variety of “access control solution[s]” for “new security threats that can potentially affect any organization,” buyers can assume little other than that G4S’s proposed ‘solutions’ are necessary. Advertising strategies such as this appeal to a common-sense understanding that there cannot be a solution without a problem, particularly not if a company is deliberately vocal about the amount of money and effort they are sinking into solving this ‘problem’.
There is, perhaps, more than monetary profit to be made here; being able to both provide, integrate and maintain a whole variety of security systems allows G4S to be in full control of any operation. This, coupled with G4S’s ruthless expansionism into any field where its manpower or technology services can be applied, be it in immigration detention or government security, give the corporation a great deal of power. And as has already been seen, both with the claims of abuse at its privately run detention centres and indirectly in the law suits brought against Hashmira, G4S is not a company whose questionable power can easily be contained.
The installation of advanced security systems has a unique ability to feed into current highly militarised political and social trends. They essentially become self-marketing. The more protected places there are, the more dangerous the unprotected places seem by comparison. If you can’t be safe from terrorism in your workplace without biometric fortifications, how can you possibly be safe outside of it? This logic has massive potential for automatically creating future markets, as those managing access to spaces are forced to update to the latest security to ensure that they are not the target of the next attack. To quote G4S Technology, in the world of corporate marketing, “Security is no longer a choice; it’s a necessity.”
For more information about countering the Counter Terror Expo, see www.dsei.org.
Original article at http://www.corporatewatch.org/?lid=3500 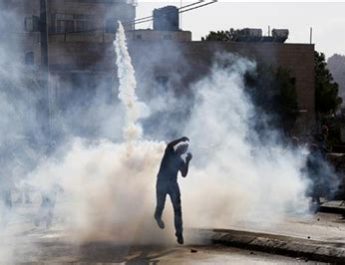