As part of Corporate Watch’s efforts to map settlement exports from the Jordan Valley, we visited the illegal Israeli settlement of Ro’i earlier this year.
Established in 1976, Ro’i is a “typical” Jordan Valley settlement in that it has a low population (of less than 150 settlers), but has stolen large areas of land from the indigenous Palestinian population. With its private security, army protection and rows upon rows of greenhouses, Ro’i poses a challenge to the existence of Bedouin communities such as nearby Al Hadidya and Ras-Al Ahmar, who are under constant threat of house demolitions and army harassment aimed at the  ethnic cleansing of bedouin from the area. The Israeli’s described these communities as a “security threat” to the settlers.
Al Hadidya is located just next to Ro’i, which was partially built on their land, and inhabitants have to more or less drive through the the outskirts of the settlement in order to reach their home. Any company trading from Ro’i, or importing their produce, are directly responsible for the very real possibility of Al Hadidya’s forced extinction.

As is the case in all settlement businesses, most of the workforce in Ro’i is Palestinian. According to our research and interviews with workers, Palestinians working in Ro’i suffer the same bad conditions as other settlement workers in the Valley, getting neither contracts, payslips, health insurance or holiday pay. The rate of pay seems to vary more than is common in other settlements, with workers as young as 15 years old earning a mere 56NIS a day and one worker -who had worked there for 15 years- getting 120NIS a day. The average pay, they said, is around 75NIS a day -around half of the minimum wage which all workers are entitled to.
Companies found trading from Ro’i:
Bickel Group Ltd http://www.bickel.co.il/ bickel-office@bickel.co.il
Ro’i is a big exporter of flowers and works with the Israeli company Bickel. The Bickel Group has been trading in flowers since its inception in 1944 and has lately started to export herbs, fruit and vegetables, some of which are organic. The Bickel Group comprises of Bickel Flowers Ltd, Bickel Group Export and Trade (which was the company working in Ro’i) and Bickel Flowers UK. Bickel Flowers UK was established in 1998 and is the marketing arm for exports to the UK and Ireland. They are listed as a registered active importer if flowers by DEFRA. The company also appear to work closely with Holland – a country known for its flower exports. There have previously been suspicions that Israeli flowers sometimes get shipped to Holland and then repackaged, as flowers are not required to give a country of origin.
We have been unable to obtain an address for Bickel Flowers UK, but the address for a Bickel contact is Holland is: Bickel Group Holland, P.O. Box 6030, 2001 HA, Haarem. Phone 0031237505120

Carmel Agrexco http://www.agrexco.co.il/en/home.asp :
As you would expect, Carmel Agrexco has a large presence in Ro’i, where they are yet again working with individual settlers (for a previous report on Agrexco in the Valley see http://corporateoccupation.wordpress.com/2010/04/13/corporations-in-tomer-settlement/ ). As in Mehola, much of their exports appear to consist of various herbs. However, there were also several Carmel Agrexco branded packing houses for the export of flowers. The Agrexco growers spotted inside Ro’i are: Capoano Isaac and Marmur Shlomi (both fresh herbs), Sivan Moshe, Mezan Zohar and Aglamaz Avi (all packing flowers and grapes for export).

Arava www.arv.co.il
Arava is one of the exporters from Ro’i. For a previous report about Arava’s business see http://corporateoccupation.wordpress.com/2010/04/13/corporations-in-tomer-settlement-part-2/ . We found one Arava packing house dedicated to exporting “Fresh herbs from the desert”. It is run by the grower Elchayany David.

FloraHolland http://www.floraholland.com/en/Pages/default.aspx
The Dutch FloraHolland -whose signs were seen on several flower growing greenhouses in Ro’i- is a cooperative growers’ collective and one of the world’s largest flower auctioning houses. Their daily auctions take place in various locations in the Netherlands, and then the produce get transported straight to the buyer. Israel is one of the six biggest flower providers for FloraHolland, and the UK is one of the five main countries they export to, so Israel’s settlement produce is very likely to make it’s way to the UK via Holland without us even being able to trace it.
For contact details for the various FloraHolland sites, see http://www.floraholland.com/en/general/pages/contact.aspx

MAG
There were several signs for an Israeli company called MAG inside Ro’i. They seem to be in the business of fish breeding -which they are carrying out on the settlement- but their logo could also be found alongside Agrexco’s on at least one packing house. Corporate Watch have as yet been able to find any further information about this company.

Yamko Yadpaz Industries Ltd http://www.yamko.co.il
Yamko Yadpaz is an Israeli company specialising in greenhouses and greenhouse technology. They do not trade from Ro’i but their products are used by many of the settlers for their illegal agriculture projects. They describe themselves as “The leading Israeli supplier of greenhouses with more than 20 years of experience in export of greenhouses world wide”.
Although they don’t list all their distributors, they do have a link to their agents, who deal with exports to Kenya, USA, Russia, Ukraine and Belarus:
http://www.yamko.co.il/index.php?page_id=369
More photos from Ro’i: 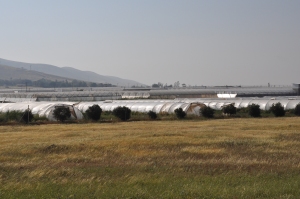 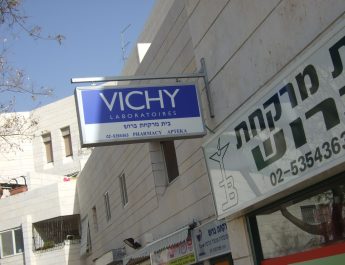 Field Produce in the Jordan Valley