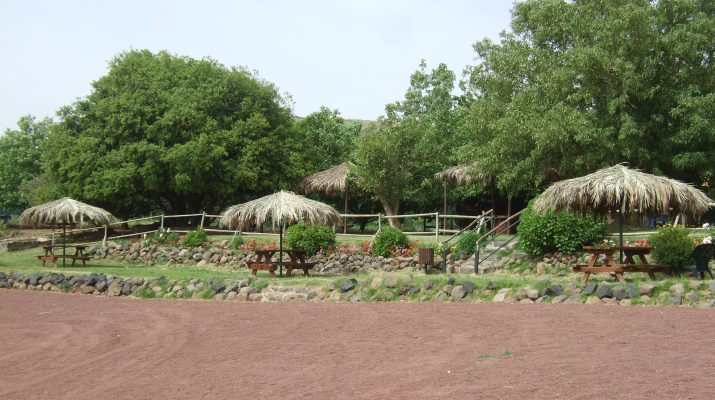 Ein Zivan kibbutz presents itself as the perfect retreat for Israeli families who want some time away from the heat and buzz of cities like Tel Aviv; it is green, quiet and benefits from the cooler, more comfortable climate. It was also one of the first settlements in the Israeli occupied Golan. Established in 1968, it has a population of around 50 Israeli families and -like most Golan settlements- makes its money through tourism and fruit sales. Cherries, blackberries, strawberries, peaches, pomegranates, plums, apples and various herbs are all grown on the land occupied by Ein Zivan. The kibbutz runs a popular ‘pick your own fruit’ service for tourists and locals, but its fields are covered in flags and signs for the Israeli fruit export and marketing company Beresheet, who clearly run the distribution part of their business (for a previous Corporate Watch article about Beresheet see http://corporateoccupation.wordpress.com/2010/04/22/beresheet-exporting-the-fruits-of-occupation/ ).

When Corporate Watch visited Ein Zivan they were working on expanding the tourist appeal of the settlement: they were just about to have an opening party for a new ‘Peter Pan children’s park’ and a petting zoo.

There is a bed and breakfast, Lan Bagolan, located inside the settlement (http://www.zimmer.co.il/galil_lang.asp?Site_ID=232&lang=1 ). Update 2018: Lan Bagolan is advertised on TripAdvisor.

Pelter winery is also part of the settlement, and exports some of its produce to the USA, Belgium, France, Switzerland, Luxembourg and Denmark. They also say that Pelter wines are available in more than 20 Michelin starred restaurants (for locations where Pelter wines are sold see http://www.pelterwinery.co.il/buy.asp ).

Ein Zivan seemed proud of their location, and the woman who showed me around stated happily that tourists are regularly taken on guided tours to the ‘UN line’ located merely a few hundred meters from the centre of the Kibbutz. “We want to show them exactly how close we are to Syria”, she said, but the purpose for this was unclear. You can only assume that any easily impressed tourist will not be informed that they are in fact holidaying on illegally occupied Syrian land.

Just as is increasingly the case in the West Bank, the fields of Ein Zivan were worked by Thai settlement workers.

NaanDan Jain has distributors in most European countries and subsidiaries in Spain, France, Italy and Romania and were providing services to farmers in Ein Zivan. For a full list of distributors see http://www.naandanjain.com/global-naandanjain/europe/ . The UK one is K.A.R. UK, Invar Road, Swinton, Manchester M27 3PN, email: sales@karuk.com, phone: 0161 939 703.

Occupation as Profit: The Settler Economy

One thought on “Tourism, fruit picking and occupation ideology: Ein Zivan settlement in the Golan”