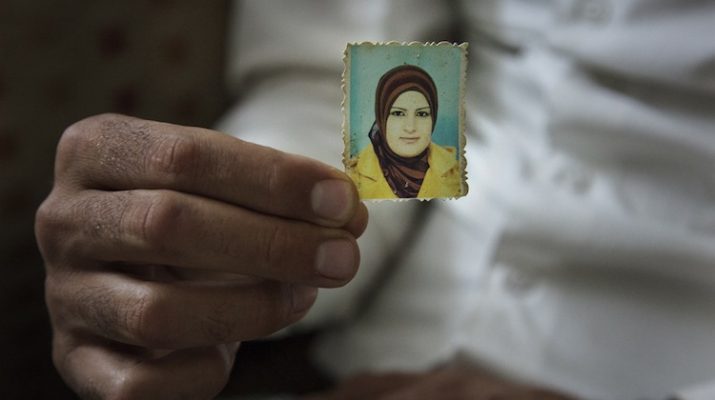 Sireen Khudiri (Sawafteh), who is active in the non-violent campaign for human rights in Palestine, was arrested on 14 May 2013 by the Israeli army. She is currently being held without charge in Al Jalameh interrogation centre near Haifa, inside the 1948 borders of Israel. Statements by Israeli prosecutors indicate that she is being held because of internet activism.

The security systems in Al Jalameh interrogation centre (also known as ‘Kishon’) were provided by British/Danish company G4S (see this report by Who Profits?, page 13).

Sireen’s detention in Al Jalameh is illegal under the Geneva Convention, which states that prisoners arrested within an occupied territory should only be imprisoned within the occupied territory. In providing services to Al Jalameh, G4S is complicit in these breaches of international law.

For more info on G4S see Corporate Watch’s company profile. Reprinted below is a statement written by Sireen’s family and friends:

Last Tuesday Sireen, a 24 year old woman from Tubas, was detained by the Israeli occupation forces. She is currently being held in Al Jalameh, an Israeli prison. Her family and friends fear for her safety.

She has been denied access to a lawyer and she has not been allowed to make any contact with her loved ones since her abduction. At around 3pm last Tuesday.

Sireen’s car was stopped at a temporary check point on the road between Nablus and Tubas in the West Bank. After brief questioning by the Israeli Occupation Forces (IOF) she was detained. The second person in the car was also detained. In the early hours on Wednesday, the IOF raided Sireen’s family home whilst her father Khalid Sawafteh, her mother, three brothers, sisters in law and their two young children were sleeping. 25 IOF army jeeps entered the town of Tubas. 20 officers entered the home and over 100 remained in the street cornering off the house. The family and young children were all taken into one room whilst their home was ransacked. The IOF took all the computers in the house leaving Sireen’s relatives in shock.

Tubas is located in Area A as designated under the Oslo Accords, an agreement drawn up between the Palestinian Authority and the Israeli government. ‘Legally’ it is under total Palestinian civil and military control. Israeli civilians and military are prohibited to enter Area A and any incursion into this area is considered a breach of this agreement. Despite this, the IOF have continue to carry out ‘operations’ in Area A. The illegal incursion on Wednesday morning sparked protests in Tubas. Israeli forces fired tear gas and sound grenades at local residents as they gathered. Omar Abed al-Razaq, a 20 year old local university student from Nablus, was injured. He is in a serious but stable condition in Nablus Hospital. He has lost some of his fingers and is currently unable to communicate with his visitors. The full extent of his injuries are not yet known.

The head of the Palestinian Prisoners Society in Tubas, Mahmud Sawafteh, denounced Israel’s continuous raids, which he says causes ‘fear and panic among residents’. Since her detention, Sireen has been forcibly transferred out of the Occupied Palestinian Territories to an Israeli prison in Haifa located in the north of Israel, a practice illegal under international law.

Article 49 of the Fourth Geneva Convention states that individual or mass forcible transfers, as well as deportations of protected persons from occupied territory to the territory of the Occupying Power or to that of any other country, occupied or not, are prohibited, regardless of their motive”. While Article 76 states clearly that ‘protected persons accused of offences shall be detained in the occupied country, and if convicted they shall serve their sentences therein”.

Last Thursday, lawyers acting for Sireen tried to visit the prison inside Israel where she is being held. They were refused entry. She appeared in court on Monday with her hands and legs shackled. The spurious charge was internet activism, creating a Facebook page which is considered a ‘threat’ to the ‘security’ of the region.

Sireen is active in the non violent campaign for human rights in Palestine. She studied computer science at the Open University in Tubas. During her studies she was actively involved in a twinning project between Tubas and the University of Sussex, England. She took part in a delegation of students which visited the UK from Palestine to strengthen links and foster friendships. Rashed Kahled, Sireen’s older brother, said: “We in the family are very concerned for Sireen and we would love her to be returned to us soon. My mother is very sad and fears for Sireen, she cannot sleep. How can we be at peace? We do not know what is happening and we are not allowed to see her.” Many Palestinian women prisoners suffer abuse during their detention.

Palestinian women prisoners are often kept in the same cells as Israeli female convicts. This practice often leads to female Palestinian prisoners being humiliated, suffering from threats and assault perpetrated with impunity by the Israel prisoners.
Adameer, a Palestinian Prisoner Support and Human Rights Organisation report that Palestinian women prisoners ‘are subjected to some form of psychological torture and ill-treatment throughout the process of their arrest and detention, including various forms of sexual violence that occur such as beatings, insults, threats, body searches, and sexually explicit harassment. Upon arrest, women detainees are not informed where they are being taken and are rarely explained their rights during interrogation. These techniques of torture and ill-treatment are used not only as means to intimidate Palestinian women detainees, but also as tools to humiliate Palestinian women and coerce them into giving confessions.’

Sireen was in court for the second time this Wednesday. The judge extended her detention for a further 6 days. She will appear again on Monday, when it is possible her detention will be further extended.

Send messages of solidarity and support here:
https://www.facebook.com/Welcome.toOo.Palestine
– Write to your MP and ask them to make representations to the Israeli government calling for Sireen’s release.
– Take action against G4S, a British/Danish company that provides services to Al Jalameh, where Sireen is being held.
Find out how at http://stopg4s.net/