Over the last year Corporate Watch has reported on the growing international campaign against Veolia and its attempts to extract itself from a controversial contract with the Israeli government.
Veolia has several contracts in Israel and the West Bank. Its participation in the Citypass Consortium, the group of companies contracted by the Israeli state to build a tramway in occupied East Jerusalem, has provoked international action, under the banner of Derail Veolia, from Australia to France, Sweden and the UK.
In October, Corporate Watch reported that Veolia, tired of persistent international pressure, was attempting to pull out of the thirty year scheme to run the tramway and sell its 5% stake in the consortium. However, due to the company’s contractual obligations, it has been forced to remain a participant in the scheme for the next five years and provide support to Dan, the Israeli transport company which has bought 49% of Veolia’s shares in the scheme. Veolia’s contract stipulated that the company could pull out of the work if it was replaced by an equally experienced company. It would seem, however, that no international company was willing to expose itself to the anger that accompanies working on the scheme, and no Israeli company had the requisite experience to take on the contract without assistance.
Another French company involved in building the tramway, Alstom, was forced to speak to the media about the scheme, declaring “we are not a political company”. The Boycott National Committee (BNC) has recently renewed calls for Arab states to boycott both Veolia and Alstom. Alstom is particularly vulnerable as it has been contracted by the Saudi government to build the Haramain Express railway, connecting the cities of Mecca and Medina via Jedda.
Veolia also runs bus services connecting Israel with Israeli settlements in the West Bank and runs a waste processing site, the Tovlan Landfill, in the occupied Jordan Valley. See www.corporatewatch.org/?lid=3433 for more details
For more information see Adri Nieuwhof in Electronic Intifada – http://electronicintifada.net/v2/article10909.shtml
For original article see http://www.corporatewatch.org/?lid=3474 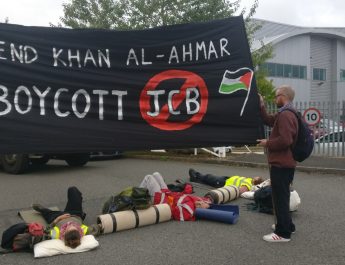