Human rights activists shut down the Carmel-Agrexco depot in Hayes, Middlesex, for 12 hours on 28 September, 2008, as part of a week of action called by the Boycott Israeli Goods campaign. Both gates to the depot were blocked, with four protesters locking themselves inside a cage blocking one gate, while another was D-locked to the other. At least 14 trucks were prevented from entering the premises during the day.
The day before, at about 3:30am, activists with tipper trucks had dumped builders rubble across both gates of the depot. Protests against the sale of Israeli produce from occupied Palestinian land also took place outside supermarkets around the country, which account for 60% of Carmel-Agrexco’s total exports.
The Israeli government has a 50% stake in Agrexco Agricultural Export Company Ltd, whose exports include flowers, avocados and herbs grown in illegal Israeli settlements on occupied Palestinian land. Earlier this month, an Israeli ministerial committee decided that the company will be privatised, as reported by Corporate Watch in the last News Updates. Campaigners argue that Agrexco’s harvesting and sale of goods from illegal settlements built in the Palestinian Occupied Territories have only been enabled by eviction, murder and theft of resources, which are considered “war crimes” under the International Criminal Courts Act 2001. As such, Agrexco’s business of importing fresh produce into the UK is “unlawful business”.
Activists participating in last week’s action did not expect to be arrested as Carmel-Agrexco do not usually cooperate with police over prosecutions. This is apparently because the company does not want to have the lawfulness of its business exposed to scrutiny in court. In 2004, a court case against seven activists arrested for protesting against Carmel-Agrexco collapsed after evidence of Carmel-Agrexco’s dealings with illegal settlements was disclosed. Nonetheless, one protester was arrested during the September 28th action for allegedly ‘obstructing of the highway’. He was kept in a cell overnight and was not released until after appearing in court at 3pm the following day. Many of the activists participating in the action have spent time living and working in the Occupied Palestinian Territories and witnessed first-hand the extra-judicial killings, collective punishment and wilful damage of land, property and infrastructure by Israel against Palestinians. One of the blockaders, Sam Harwood, said: “Agrexco is responsible for human rights crimes against the Palestinian people. The British supermarkets which buy produce from Agrexco are also complicit. Agrexco must by held liable for its unlawful business.”
For more information on the campaign against Agrexco, see www.palestinecampaign.org and www.bigcampaign.org.
Original article at http://www.corporatewatch.org/?lid=3150 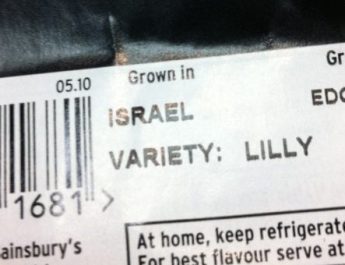