by Sophie Williams, Disarm DSEi
2009 is the tenth anniversary of Defence Systems Equipment International – the world’s largest arms fair – due to take place at the ExCeL Centre in East London between 8 – 11th September. At DSEi 2007, there were 1352 exhibitors from 40 different countries with a total of 26,5000 visitors.
Oxfam has called the arms trade “out of control” and states that “as well as prolonging and intensifying conflicts, the poorly regulated arms trade causes huge levels of waste, corruption and debt.” The recent devastation in Gaza was aided by UK arms sales of over £27 million in the first nine months of 2008.
According to UNICEF, two million children were killed between 1986 and 1996 as a result of armed conflict. A further six million were also injured or permanently disabled and countless others were forced to witness or take part in violence. Graca Machel, the author of the report, also recently stated that “wars have always victimised children and other non-combatants, but modern wars are exploiting, maiming and killing children more callously and more systematically than ever.”
This year DISARM DSEi have issued two calls to action – one for regional actions the week before DSEi with the aim of stopping the dealers moving their weaponry from their factories to ExCeL, and a mass action on 8th September in The City of London. A map has been produced showing the locations of the UK based exhibitors at DSEI, take a look at www.dsei.org to find your local war profiteer.
Mobilisations against DSEi have seen many failures and successes. In 1999, at DSEi’s original home on MoD land in Chertsey, protesters caused so much disruption to the roads that delegates were advised they could only travel by trains – which were, of course, duly occupied and delayed. 2001 saw DSEi move to it’s now seemingly permanent home at the ExCeL Centre, and whilst planes were flying into the twin towers, activists were descending on ExCeL in a ‘Fiesta for Life’. Next day, while the rest of the world was mourning, business was booming at DSEi. 2003 saw perhaps our most successful protests against DSEi. The week saw continuous disruption to DSEi on road and rail, both through mass actions, and a number of highly successful affinity group actions, including groups targeting the set up of the exhibition.
However, in recent years we have seen our numbers dwindle, and whilst there have been some effective actions against DSEi, such as the unveiling of the Space Hijacker’s tank outside the fair in 2007, we have not had the same impact as previous years.
One of the reasons for the dwindling numbers has to be oppressive policing operations. Tactics such as kettling, repeated stop and searches, police following and harassing activists, and ridiculous arrests have led people to feel either there is no point in attending DSEi protests, or they simply don’t want to subject themselves to this policing. The ExCeL Centre may not have been the most salubrious location for the G20 summit, but after eight years of corralling protesters there, the police knew they would be able to stop any mass protest in the area. However, we refuse to let the police beat us into silence, and it is important people keep returning to the streets despite the repression faced.
One of the reasons we have decided to call the mass action in The City this year is because of a recognition not only of how difficult it is to shut down ExCeL, but a clear absence of secondary targets in the area should we not reach the centre. Furthermore, this year we are trying to shift the focus away from being a single issue campaign, and are making a conscious effort to link anti-militarist campaigning into other areas. All of our campaigning issues are interlinked. For example: · The majority of asylum seekers have fled because of the effects of war and the arms trade. However, in locking these people up, and labeling them “scroungers”, the government conveniently ignores the huge profits made by the UK companies that made the weapons which destroyed their homelands.
· The military are climate criminals responsible for 25% of air pollution. In 2006, according to Scientists for Global Responsibility, the UK military as a whole was responsible for emitting 5 million tonnes of carbon dioxide. Furthermore, a report from the Royal Commission on Environmental Pollution into aircraft emissions in 2002 stated that “the performance requirements of military aircraft suggest that compared to civil aircraft, they are likely to produce proportionately more emissions”.
· Animal testing plays a major role in military research. In 2006, there were more than 21,000 animals, including monkeys, ferrets and pigs being subjected to experimentation at Porton Down. This was a 76% increase from 2000. Tests include applying fatal doses of a nerve agent to an animal’s skin, and giving sarin and anthrax to primates. However, the bankers and the investors, are the glue which bind all these issues together, and it is for this reason we are taking our protests to the City.
High street banks invest billions in the arms trade, as well as supporting the corporations who profit from environmental destruction, attacks on migrants and animal torture. Find out more and get involved – www.dsei.org – or get regular updates on Twitter (@dsei.org)
————-
Investors in the Arms Trade:
• Barclays has the largest amount of shares in the global arms trade and helped to finance Clarion’s purchase of the DSEi arms fair;
• Royal Bank of Scotland is the biggest creditor to the global arms trade;
• Lloyds, HSBS and Halifax are also investors in and creditors to the global arms trade;
• Axa, F and C, Schroders, Aviva, Invesco, Legal and General, Prudential, the National Grid, BT and the Universities Superannuation Fund all invest in the global arms trade
Original article at http://www.corporatewatch.org/?lid=3426 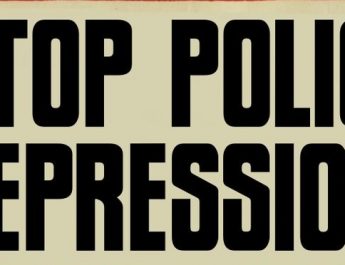 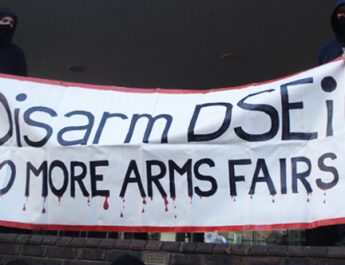