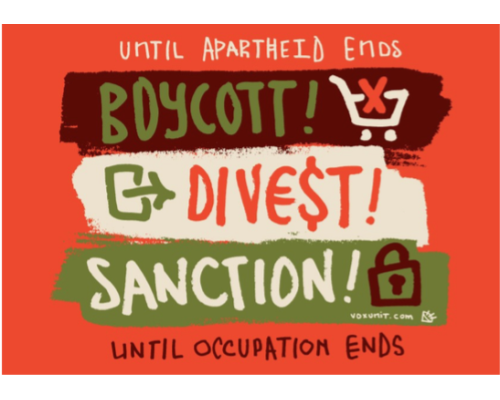 On February 22nd Anshel Pfeffer, writing about Corporate Watch’s recent book Targeting Israeli Apartheid in Ha’aretz, claimed that “while the movement has managed to mobilize thousands of supporters around the world to send online entreaties that convince performers, many of whom see themselves as human-rights activists, to avoid Israel, the corporations and some of the more famous performers who are less exposed to Facebook campaigns, have been impervious.” We feel that this is gross misjudgement of the BDS movement.

To say that the BDS movement has been confined to online activism is to ignore the hundreds of thousands who demonstrated in European cities during the massacre in Gaza and the great many acts of direct action against companies profiting from Israeli apartheid, militarism and occupation.

To give just one example, during the 2009 attack on Gaza six British activists broke into the EDO/ITT weapons factory (now a part of ITT Exelis) and caused $300,000 worth of damage, disabling the production line and preventing the manufacture of weapons components bound for Israel. In 2010 a British jury found the activists not guilty on the basis that they had acted to prevent war crimes.

Similarly, a concerted campaign in London against Ahava, an Israeli company manufacturing Dead Sea cosmetics in the illegal West Bank settlement of Mitzpe Shalem, lead to the closure of the store. The campaign included pickets of the store, legal action and activists locking themselves inside the premises to prevent the shop from trading.

Such campaigns have not been limited to the UK either. After the 2010 attack on the Mavi Marmara, dockworkers in Sweden and California refused to handle Israeli cargo or service Zim Lines’ vessels.

As to Pfeffer’s claim that the BDS movement has not deterred investment, consider the Franco-Belgian bank Dexia, one of only a few international banks operating in Israel. After a campaign over its financing of development in the West Bank settlements, Dexia announced its intention to divest itself of Dexia Israel, recognising that financing settlements is contrary to its code of ethics. The sale was planned despite the losses the move would incur for the company.

Veolia, the French multinational which is part of the Citypass consortium, provides waste services to the Jordan Valley settlements and bus services between several settlements in the West Bank. Veolia has lost multi-million dollar government procurement contacts due to campaigning across Europe. Veolia Israel CEO Arnon Fishbein announced in January that many within the group feel the company has been damaged by Citypass. Veolia has been unable to find an international buyer for its stake, illustrating the deterrent effect of the BDS campaigns.

Finally, According to Israeli economist Shir Hever, one factor which contributed to the collapse of Agrexco in 2011 is likely to be the effect of the global BDS movement on sales (see, for example, www.jnews.org.uk/commentary/why-did-agrexco-go-bankrupt).

Of course the BDS movement is not the panacea to Israeli state repression against the Palestinians. Instead, it is one of the most effective ways that the solidarity movement can support the struggle against Israeli apartheid, militarism and the occupation of Palestine and complement the actions of Palestinians and Israelis struggling with the same aims.