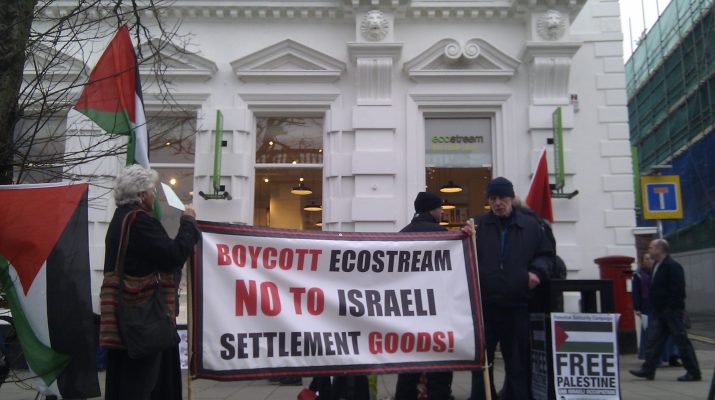 The CEO of Soda Club, an Israeli company with a production facility in the settlement industrial zone of Mishor Adumim, has vowed to stop the protests happening outside its UK shop.

Daniel Birnbaum told local paper The Argus today that the firm will take legal action to clear the protesters from in front of their store.

Ecostream, Soda Club’s store in Brighton has faced biweekly pickets outside its shop in Western Road by supporters of the Palestinian call for Boycott, Divestment and Sanctions (BDS) against companies complicit in Israeli apartheid, occupation and militarism. These are accompanied by smaller counter demonstrations by a coalition of Zionists and Christian Zionists handing out material from the British Israel Communications and Research Centre (BICOM) and the US based  ‘We Stand With Israel’.

In the interview with The Argus Birnbaum announced the company’ intention to remain in Mishor Adumim, a settlement industrial zone situated between East Jerusalem and Jericho.

Last week the Israeli embassy contacted Sussex Police to discuss their ‘concerns’ about the demonstrations. The Israeli embassy clearly has an interest in promoting this company as, in 2010, Soda Club made the eighth largest Initial Public Offering (IPO) of any Israeli company on the NASDAQ. It has been promoting itself extremely heavily in the UK with advertorials in The Guardian ,The BBC, and an interview with Birnbaum on the Today Programme.

The company has divided local politicias with Conservative MP Mike Weatherley condemning the anti-Ecostream demonstrators, while Green MP Caroline Lucas supported the ‘right to protest’ against the company and gave some mealy-mouthed criticism of the company.

On Monday 15th October Corporate Watch will be participating in Justice for Palestine: Brighton and Boycott – Why our city should not be hosting the Israeli state-sponsored dance company (Batsheva) and a shop (Ecostream) that sells goods made in an Israeli settlement. The meeting is at 7.30pm at the Friends Meeting House. Ship Street, Brighton, BN1 1AF.