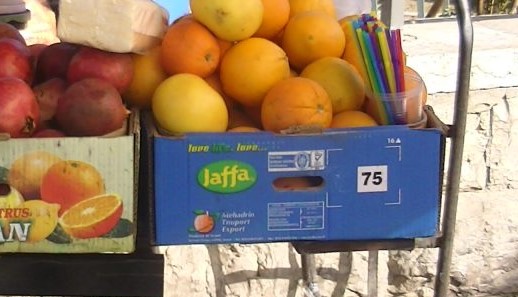 On February 9th a coalition of civil society groups have called for an international day of action against Israeli agricultural companies in line with the movement for boycott, divestment and sanctions (BDS) against Israeli militarism, apartheid and colonisation. Corporate Occupation/Corporate Watch researchers are in Palestine collecting new information and over the coming weeks Corporate Occupation/Corporate Watch will be writing a series of articles and blogs examining Israeli agricultural exports. 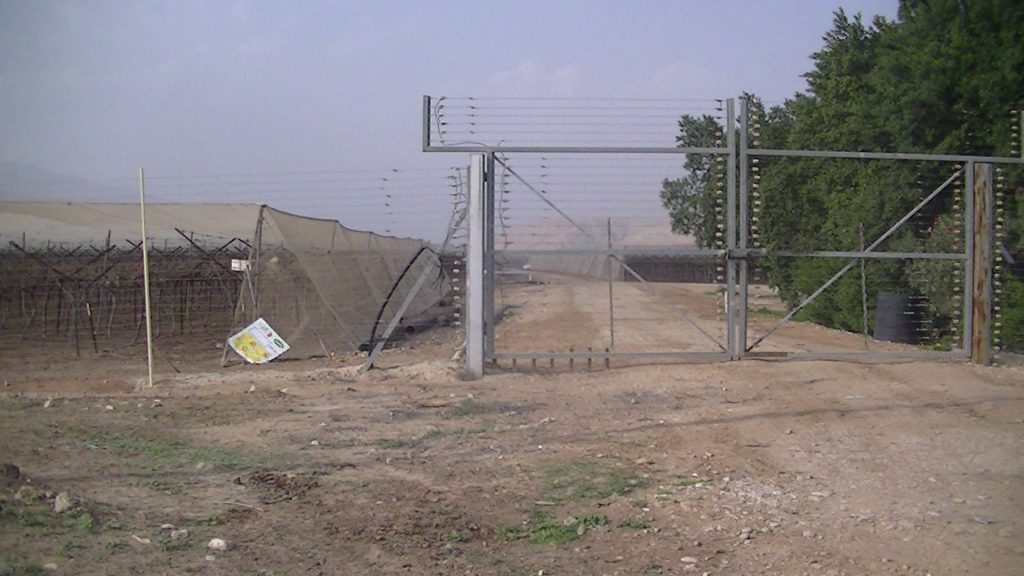 On 28th January 2o13 Corporate Watch photographed a Mehadrin sign bearing the logo of the Jaffa brand on land which had been fenced off by the Massua settlement close to the Palestinian community of Abu Al Ajaj.

Massua settlement was established in 1968 by a unit of the Israeli military in the Israeli occupied Jordan Valley (see here). It is now an agricultural community with a population of just a few hundred. Over the past few years it has been encroaching on the land of the neighbouring Palestinian community of Abu Al Ajaj. In 2004 settlers from Massua annexed some of the land of Abu Al Ajaj and erected greenhouses. In October 2010 settlers fenced off a further patch of land belonging to Palestinians prompting protests and arrests.

The settlement is still expanding, over the last few months settlers from Massua have moved into several buildings outside the fence of the settlement and are advertising for new families to move in.

The expansion of Massua is facilitated by a policy of home demolitions by the Israeli military against the residents of Abu Al Ajaj. In 2008, the military issued demolition orders on residents of Abu Al Ajaj on the grounds that the land where they lived was ‘government land’. In 2010 four homes (three tin buildings and a tent) were destroyed in an operation involving 200 soldiers and two bulldozers. The damage was estimated at 120, 000 NIS.

In September 2012 the military issued three new demolition orders in the area. Jordan Valley Solidarity, a grassroots Palestinian group working in the area, wrote at the time “The present arbitrary actions by the Israeli government against the Palestinian citizens in the Jordan Valley are in line with their policy of confiscating more land and the expulsion of indigenous population. In contrast, services are provided to Israeli settler: land, water, electricity, infrastructure, and governmental support.” On 24th January 2013 two animal sheds were demolished by the Israeli army in Abu Al Ajaj.

Abu al Ajaj lies in what is known as Area C of the West Bank, an area placed under temporary Israeli control under the Oslo Accords. The Israeli administration does not allow Palestinian communities to build anything in Area C and enforces this policy with home demolitions. Despite the fact that the Oslo accords failed to reach any final agreement the Israeli restrictions have remained in place.

By sourcing products from Massua, Mehadrin is complicit in the annexation of Palestinian land by the settlers of Massua and in the policy of home demolitions which is aimed at the ethnic cleansing of Palestinians living in Abu al Ajaj. It is important that the BDS movement takes action against Mehadrin in solidarity with Palestinian steadfast resistance against the demolitions.

Mehadrin states on its website that it is a “leading global supplier of the world – renowned JAFFA brand.” Jaffa products are stocked by major supermarket chains including Tesco and Sainsbury. Mehadrin lists www.jaffa.co.uk as the website for Mehadrin UK (see http://www.mehadrin.co.il/docs/P219/). 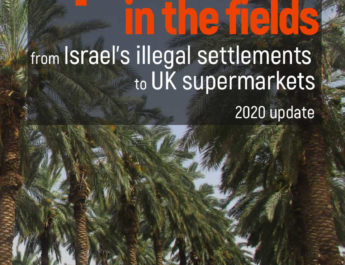 Tesco: the boycott that wasn’t

3 thoughts on “Jaffa: Harvesting the fruit of the occupation”