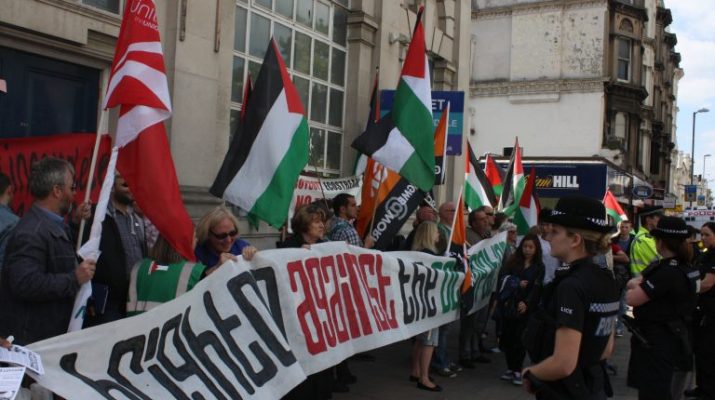 Members from eight UK trade unions joined the long running weekly picket of SodaStream’s only UK shop, EcoStream in Brighton, on Saturday May 3. Members from The Public and Commercial Services Union (PCS), National Union of Journalists (NUJ), University and College Union (UCU), National Union of  Teachers (NUT), Solidarity Federation (SolFed), Unison, Unite and GMB all showed up to show solidarity with Palestinians workers living under occupation. There were also representatives from Brighton Benefits Campaign and Defend the NHS present.

There is a growing world-wide boycott campaign against SodaStream, an Israeli company which has one of its main manufacturing facilities in the illegal settlement industrial zone of Mishor Adumim. The EcoStream store has been picketed by Palestine solidarity campaigners on a weekly basis since it first opened its doors in 2012.

Shortly after the activists started targeting the shop, local Zionists began a counter demonstration, and SodaStream’s PR machine went into overdrive to prove that their business on occupied territory was beneficial for the West Bank as the company employs some Palestinians.

Police responded to the increased protester numbers on May 3 by forcing the protest across the road onto the pavement opposite the shop and arresting 5 people in the process. Meanwhile, the Zionist counter protesters were allowed to remain directly outside the shop. To read more about the protests against EcoStream check out www.brightonpalestine.org.

However, it is clear that less and less people are swallowing the company’s propaganda and the trade unionists present last Saturday had no doubts as to where their solidarity must lie and no problems with putting the situation into context.

One union member, quoted on the Brighton and Hove Palestine Solidarity Campaign’s web-site said, when asked why he was there:

“This is employment in conditions of illegal occupation. The Palestinian villages, land, economy and people were wiped out to make way for the building of an illegal Israeli colony, and then SodaStream tries to convince the world that they are a benevolent provider of employment, Unbelievable!”

Support for Palestine is really taking off within the trade union movement, the NUT passed a motion on Palestine during their annual conference in May, bringing them in line with Trade Union Council policy. The motion called for a boycott of ‘goods of companies who profit from illegal settlements, the occupation and the construction of the wall’ as well as an end to the occupation and the siege of Gaza.

As Corporate Watch has previously reported, the issues with SodaStream’s factory in Mishor Adumim are wide and complex, ranging from complicity in settlement expansion, and hence the ethnic cleansing of the surrounding Bedouin communities, to worker’s rights issues.

Corporate Watch has yet to come across a single settlement worker properly represented by an Israeli trade union and Palestinian unions do not generally have access to the settlements. As the Israeli research group Who Profits has pointed out, all settlement workers are required to have special security clearance from Israel’s internal security service, with permits easily revoked if workers try to organise or engage in political activities.

SodaStream has faced heavy criticism for the conditions endured by its workers but after the company received some negative publicity it is believed that they started paying their workers at least minimum wage in 2009. Palestinian workers in Israeli settlements have been entitled by law to receive the Israeli minimum wage since a precedent setting ruling in the Israeli high court in 2007, although this is rarely adhered to and enforced. The law also stipulates that workers should receive the same holiday pay, pay slips and heath cover as workers in Israel.

In 2010 SodaStream dismissed 140 workers who were working for the factory through the sub contractor Pear Sol. It was only after pressure from the Israeli workers’ rights group Kav LaOved (Workers’ Hotline) that the fired workers were reinstated. Importantly, however, the two people who had liaised with Kav LaOved did not get their jobs back, highlighting the consequences for any settlement workers organising politically and demanding their rights.

When Corporate Watch went to see Kav LaOved in Tel Aviv in January 2013, a case worker said that no-one there was in contact with workers inside the factory anymore and it is believed that the workers are scared of losing their jobs if they contact them. “Sodastream are very careful now”, we were told,  “They know that people are watching them and don’t want bad publicity”.

It certainly seem like SodaStream workers are worried about talking about their jobs to outsiders and without company approval. Despite interviewing workers from almost all other settlement sectors, Corporate Watch failed to find anyone from SodaStream who was willing to talk during our research trip.

When one worker did speak out to The Electronic Intifada, he made clear how SodaStream attempts to stage-manage its reputation. Talking about a promotion film called Build Bridges Not Walls, produced by the company with the intention of showing how wonderfully SodaStream treats its Palestinian workers, the man, who wished to remain anonymous, said  that he felt

“humiliated and I am also disgraced as a Palestinian, as the claims in this video are all lies. We Palestinian workers in this factory always feel like we are enslaved […] I actually saw the company preparation work [for the video]; they were preparing all the workers and telling them what to say and how to say it”.

Palestinians have been robbed of their chances of making a living from their land, or having an independent economy. As trade unions continue to stand in solidarity with Palestinians under occupation, Corporate Watch would like to repeat one of our, as yet, unanswered question to SodaStream:

Are the workers in the SodaStream factory allowed to unionise? If so, which unions operate in the industrial zone?

Corporate Watch will soon be publishing an expanded article about the villages around Mishor Adumim and the wider impact of the industrial zone on Palestinians’ lives and livelihoods.

To read more about the protests against EcoStream check out www.brightonpalestine.org.

One thought on “Trade Unions join protest against SodaStream”