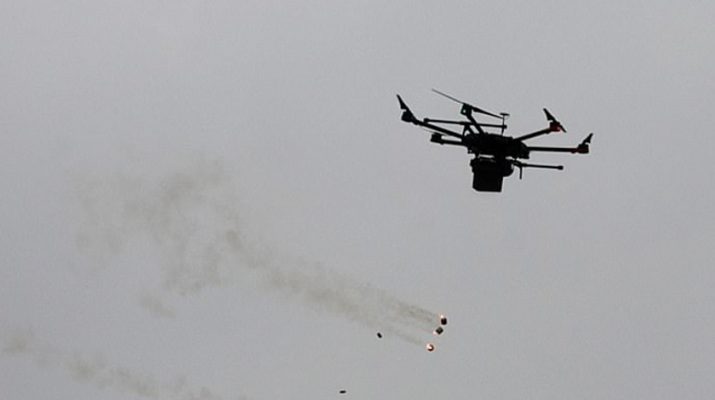 On Tuesday May 15th, over a thousand Palestinians demonstrated at Beit El checkpoint, near Ramallah in the West Bank. It was the day after Israeli forces had massacred at least 60 people who were demonstrating in Gaza. The Beit El demonstration was held on the 70th anniversary of the Nakba, when Palestinians were ethnically cleansed from their homeland in 1948.

Israeli forces used a small drone to fire tear gas at the demonstrators. The drone appears to be one manufactured by ISPRA, an Israeli arms company. The same Cyclone Riot Control drone had been used against demonstrators at the Gaza fence the day before. Drones which release tear gas were reportedly used for the first time against Palestinians in Gaza in March this year.

ISPRA is an Israeli company, jointly owned by Anat Bealy Golan and Michal Bar Hava Menahma. Click here to see a company profile of ISPRA by Who Profits?. ISPRA has been marketing the Cyclone Riot Control drone at international arms fairs since 2015.

We spoke to Rana Nazzal, a Palestinian woman living in Ramallah, about the effect of the drone on the Beit El demonstration. She told us:

“There were at least 1000 people there, spread across a huge area, and there were at least three to four groups of soldiers separate from each other, shooting simultaneously across the crowd. They were mainly shooting rubber-coated steel bullets and several different types of tear gas canisters. They were also using a multiple tear gas launcher mounted on a vehicle and a drone was firing tear gas.

What’s uniquely aggressive about the tear gas drone is that to avoid the gas, or to avoid being hit by the canisters falling from the sky, you’re having to look up into the sun. You’re dizzy and disorientated. The drone circled around us before it dropped the gas, so we never knew when the gas would be fired. It seemed to come closer to the ground before it dropped the canisters. The drone didn’t drop that many canisters, just a few, and then it had to go back and refuel. But even though it wasn’t dropping that much gas, it was dispersing people more.”

Was the demonstration less safe because of the drone?

“The drone was flying deep into the crowd. If it had only been soldiers then they would only have been able to shoot at people on the edges of the crowd: the people closest to them. There were dozens of people who were watching the protest from quite a distance and the drone came and emptied on them. They wouldn’t have been in the line of fire normally.

The drones make the entire space vulnerable, even observers. The entire time that the protest was happening there were cars passing with families in them. There is also a gas station nearby which was open. People who wouldn’t normally be part of the protest became targets, and would also have been filmed.”

Does the use of these drones make demonstrations more dangerous?

“Normally with tear gas you can see it coming, but with this you can’t. The only way it can hit you is on the head [because it is shot from above] and the only way to avoid it is to look up. This makes people disorientated, and this is definitely a tactic. I was wearing a gas mask but even so I had to look up to keep watching for the drone because it would have been scary to be hit on the head.

It’s not unique, because Israel’s weaponry has always been aggressive, but it follows the pattern of them bringing in new weaponry. It feels like the protesters are guinea pigs, and that Palestine is a testing ground for weapons, especially when you see that they haven’t been used anywhere else.”

What effect does the presence of drones have on people in the West Bank?

“Surveillance drones have been used here [in the West Bank] for a while. Part of the psychological effect of drones is that they hum, so you hear them, and you don’t know what’s going to happen next, whether they’re watching you or whether they will drop something. It makes regular days tense so you can’t live a normal life. Parents talk about this a lot, how it affects their kids. We see surveillance drones regularly in Bethlehem and other towns, and in [the village of] Nabi Saleh. Now we know that they are dropping things from the drones too, so that’s another psychological trick.”

Do you think that people should campaign against the companies that manufacture these drones?

“I think that a lot of organisations and countries are complicit in the weapons industry, a lot of the time without even knowing. That’s why divestment is so important because the militarisation of investment funds is part of what’s keeping military violence alive.

There’s a number of ways that people could fight for demilitarisation. They could blockade and do direct actions against the companies, and they could also target them economically through divestments and boycott campaigns.”

ISPRA markets its drones in arms fairs around the world and has been showcasing that particular drone. Do you think these arms exhibitions should be hosted?

“No. I think that people need to be fighting against weapons expos, and against militarisation across a broad spectrum. I’m sure you can see that the testing ground for Israeli weapons might be here but this isn’t the only place the weapons are used: they’re used against other peoples who are struggling. You can convince institutions to stop investing in military companies and you can convince your local government to stop hosting weapons expos. We can fight to make military weaponry a non-profitable business to put their money into.”

Palestinians are calling for an embargo and sanctions against the sale of weapons to Israel, and for a boycott of the purchase of weapons from Israeli companies like ISPRA.