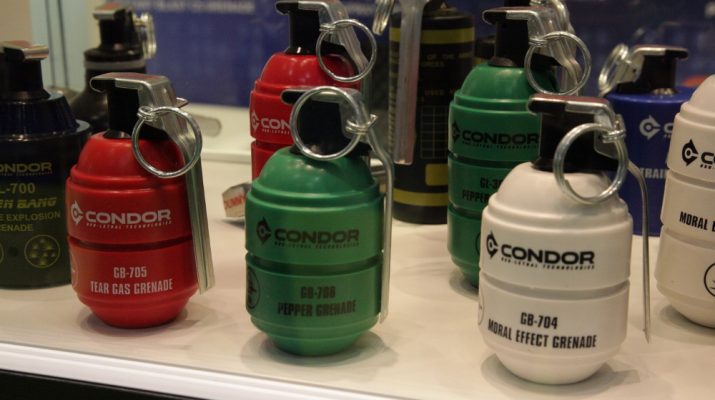 An article entitled ‘Predicting a Riot’, on the Eurosatory Land Defence and Security Exhibition website sheds light on the non-lethal weapons currently being developed to control dissent.

The article alludes to the British Summer 2011 riots and the Toronto G20 protests as examples of a “new form of mass crime” that justifies the use of new technology by police forces:

“2011 was a year of global political upheaval, as politics and technology converged to change the face of protest, direct action and mass criminal behaviour. In stark contrast to the legitimate protest, which has driven democracy in states such as Egypt, or raised political questions in Western states, a new form of mass-crime has brought massive property damage, injury and death.

…the evolution of police weapons and tactics has become necessary and justified. To support responders, policy-makers must establish new systems to rapidly stop a peaceful gathering from becoming a criminal free-for-all, while protecting a vital right to free expression.”

Interestingly, the authors set apart the uprisings in the Middle East and North Africa and the Occupy movement as examples of “legitimate protest” in contrast to the “mass-crime” of the Summer Riots. However, this divide is artificial, the Egyptian uprising, for instance, was sparked by a wave of rioting including the burning of banks and branches of multinational corporations in downtown Cairo.

In reality the movements held up here as “legitimate” have been the victims of non-lethal weapons, tear gas was widely used against demonstrators in the USA, Egypt, Syria, Bahrain and Yemen during 2011.

Of course, rioting, the mass crime which is the subject of the article, is nothing new. However, the technology being marketed for use by police forces globally is. The companies mentioned in the article developing new weapons include:

Photonic Security Systems (based in Scotland), the manufacturer of the SMU-100, currently being tested by the British police. The SMU-100 is “a hand-held laser ‘dazzler’ … Rifle-shaped and capable of incapacitating targets at up to 500m, the SMU-100 has found favour among shipping firms fighting pirates in the high-risk zone around East Africa.”

SmartRounds(US) has developed a range of “less-lethal munitions, designed to reduce casualties while increasing effectiveness. Named ShockRounds, the projectiles are fired from a standard launcher, each containing a micro-sensor that detects changes in acceleration.”

PDT Agro(Israel) has developed “Thunder Generator, a mobile sonic weapon that detonates a mix of liquefied petroleum gas and air to produce a directional sonic boom.” The Thunder Generator has been licensed by Israel’s Ministry of Defence for crowd control.

One other Israeli company has developed and tested the MEDUSA (Mob Excess Deterrent Using Silent Audio), “a vehicle-mounted personnel incapacitation system that produces a silent but “discomforting” pulse to deter crowds.”

The revolving door between the government and the arms trade 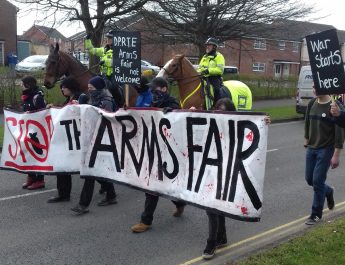