As we have previously reported Corporate Occupation was recently denied a requested visit to the SodaStream factory in the illegal West Bank settlement of Mishor Adumim.

Despite the company’s insistence that anyone who visits the premises will find it to be a force for good in the area, it was not willing to let critics challenge this assertion for themselves. In a move that seems to go against its own self proclaimed eco-friendliness  SodaStream recently paid the expenses of local Brighton journalist John Keenan when he flew over from the UK to see the factory, yet they would not let researchers already in the West Bank in.

Brighton is the location of EcoStream, SodaStream’s first own brand shop in the UK, and it has been met by weekly boycott demonstrations since its opening in the middle of 2012.

As part of its PR strategy, SodaStream has also invited the Brighton MP Mike Weatherley to the factory. Weatherley had already previously issued strong worded statements against the protests and in support of SodaStream.

After we tweeted the initial refusal for a visit, Corporate Occupation received one more email from SodaStream, this time from the Executive Assistant to the CEO rather than the PR representative. In it he asked for more details about the purpose of the request. We had already supplied these details but we dutifully sent the information again. However, since then we have had no further response directly from the company.

When sending us the denial of entry to the factory Vicky from Eulogy, SodaStream’s PR firm, asked us to let her know if there was any information she could get for us. We sent her these questions:

What areas do the Palestinian workers in the factory come from?
Are you aware of a decision by the settlement regional council not to allow the Bedouin in the communities close to Mishor Adumim to work in the industrial zone since 2009?
If so, do you comply with this decision?
Are the workers in the SodaStream factory allowed to unionise? If so, which unions operate in the industrial zone?
SodaStream chief executive Daniel Birnbaum stated in a conversation  “We pay our workers three times the Israeli national average”. How much is that in NIS?
How many Palestinians are employed by SodaStream in above entry level positions at the Mishor Adumim plant?

On the 6th of February 2013 Corporate Occupation received the following response:

“I’ve just heard back from SodaStream on your request and they have declined the opportunity to comment on this occasion. Sorry I could not be of more help”.

The questions posed by Corporate Occupation are very straight forward and, you would have thought, important ones for SodaStream to clear up. By refusing to answer them the company is being far from transparent – expecting the public to be convinced by spin alone.

The fact is that SodaStream’s main manufacturing plant is located in an illegal settlement on occupied territory. It is built on land ethnically cleansed of Palestinians, with the people previously living on that land stripped of their livelihood and way of life. SodaStream thinks that giving a few hundred carefully selected Palestinians the minimum wage is enough to make up for this injustice. But it is not. No amount of advertising can make this ok, and by refusing to answer our questions it is clear that SodaStream have no real answers when the questions are not framed in the company’s own terms.

As SodaStream will not respond to these questions, these are the answers we believe to be true. The answers are based on interviews with Palestinians living in the area around Mishor Adumim. We are still calling on SodaStream to answer these questions and provide supporting documentation if relevant.

What areas do the Palestinian workers in the factory come from?

The information we have gathered through interviews in the area suggests that the Palestinian workers in SodaStream come from places such as Hizma, Abu Dis, Ramallah, Jabba and a few from East Jerusalem, but not from the local communities threatened with displacement by the  settlement and its continuing expansion. Whereas it might be true that one or two employees have been able to build their own homes elsewhere as a result of having a job in the factory, as reported in John Keenan’s article for the Argus, the overwhelming impact on Palestinians is the opposite.

The factory is located in Area C, where Palestinian communities are not allowed to build anything, repair their houses or even connect to electricity and running water. Instead, Israeli forces are in the process of trying to remove SodaStream’s neighbours in Khan Al Ahmar from their land. Part of Khan Al Ahmar was already forcibly relocated from the area in 1998. As one man from Khan Al Ahmar put it:

“Why is the situation for the people living next to the settlement so bad and people faced with transfer from their homes if their [SodaStream’s] business is good for the area?”.

Are you aware of a decision by the settlement regional council not to allow the Bedouin communities close to Mishor Adumim to work in the industrial zone since 2009?
If so, do you comply with this decision?

According to five interviewees from different communities, the Bedouin most affected by the Ma’ale Adumim settlement expansion are no longer allowed to work in the industrial zone where SodaStream is situated. In 2009 the community of Khan Al Ahmar started building a school, despite the building restrictions in area C. As a punishment the settlement regional council made a decision to no longer employ anyone from the wider Khan Al Ahmar area (Abu al Helweh, Abu al Mihtawish, Abu Fellah and Kurshan).

Previously, around 40 people from those communities used to support their families through work in the settlement industrial zone. The school has since then been through several different court cases to resist demolition, as demanded by the settlers in Kfar Adumim.

It has always been hard for Palestinians to get jobs in the settlements as no-one is allowed to work there without gaining a special security clearance from Israel, leaving Palestinians totally at the mercy of the occupation authorities. No reason is ever given for a refusal to gain security clearance, and once you have one it has to be renewed every 2-3 months. Several people we interviewed said that if you ask why you were refused they blacklist you. Two of the people we talked to had been asked to collaborate with Israeli security forces or they would be refused work.

One of the men whose family used to live on the land where Mishor Adumim now stands said this about the factories:

Corporate Occupation has not come across any evidence that SodaStream do not comply with the agreement to exclude these communities from work.

Are the workers in the SodaStream factory allowed to unionise? If so, which unions operate in the industrial zone?

All settlement workers we have interviewed, within any industry, say that there are no unions available to Palestinians in the settlements and that organising by Palestinian unions is forbidden. If any are operating in SodaStream we would be very interested to see evidence of this.
One Palestinian union worker told us that, in his experience which spans over a decade, no case had ever been brought by the Histradrut, the Israeli trade union body, on behalf of Palestinian workers for Israeli companies in Mishor Adumim.

SodaStream chief executive Daniel Birnbaum stated in a conversation with journalists that  “We pay our workers three times the Israeli national average”. How much is that in NIS?

Corporate Watch are aware that the SodaStream factory in Mishor Adumim is, nowadays, likely to be paying at least minimum wage to its employees and it seems like conditions at the factory have changed considerably as a result of international pressure and intervention by Israeli workers’ rights group Kav LaOved. The current hourly minimum wage in Israel is 23.12 NIS . The equivalent of 184.96 NIS for an eight hour working day. As a result of a 2007 court ruling, settlement workers are entitled to the Israeli minimum wage.

How many Palestinians are employed by SodaStream in above entry level positions at the Mishor Adumim plant?

Corporate Occupation has no figures for this and, again, would invite the company to provide us with their answers to this and all of the above question.

Corporate Occupation researchers have done a large amount of research around the area of Mishor Adumim. This article takes selected quotes and information from these interviews. We will publish a comprehensive report and presentation linking all the issues together in the coming months. 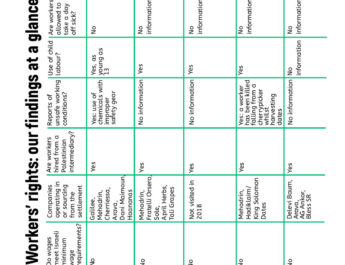 Apartheid in the Fields: From Occupied Palestine to UK Supermarkets (2020 Update), 2.1 – Workers rights in the Jordan Valley settlements

7 thoughts on ““They destroyed our lives and then gave a few people a job. It is nothing”: Some unanswered questions for SodaStream”