Unpiloted aircraft, known as drones in the arms industry, have become Israel’s weapon of choice in its attacks on Gaza.Since January 2012 drones have killed more people in Gaza than any other aircraft. In 2013 Corporate Watch carried out interviews with several victims of Israeli drone strikes.

These interviews are intended to give a voice to the survivors and to be a resource for those campaigning against the companies profiting from the manufacture of equipment used in the Israeli state’s crimes in Gaza.

We arranged to meet Basil and Mona Ash Shawa (sometimes spelled Al Shawa) at their apartment in Gaza City in November 2013 to discuss the murder of their only daughter, 18 year old Yosra, in an Israeli drone attack during Operation Pillar of Cloud. During that operation 201 out of the 255 fatalities were killed by drones.

We picked up Basil from a vigil being held by the families of the victims of the last two Israeli massacres in Gaza. The families had been on hunger strike for 20 days, and were calling on the Palestinian Authority (PA) to provide them with support after the loss of their loved ones.

In the past families of ‘martyrs’ (Palestinians killed by Israel) received financial aid to help the families to support themselves. However, since the 2009 massacre, which killed over 1400 people in just a few weeks, the PA has stopped these payments. The families have little recourse to demand compensation from the Israeli government, which is responsible for the death of their relatives, so the financial burden is demanded from the PA.

Basil took us to meet Mona at the family’s new apartment in Gaza City. They had not been there long – their last apartment was damaged in the attack that killed their daughter. Mona and Basil met in Iraq and Yosra was born there. The family moved to Gaza when Yosra was one year old.

Basil showed us the mobile phone footage he took when he returned home to find that his home had been targeted. He flicked through the pictures in his phone’s photo album and shows us a picture of the wreckage caused by the rocket from the drone, a clock that stopped at the moment the rockets struck, and his daughter’s blood on the floor.

The attack happened at 4.30pm on the November 20 2012 when Yosra and her mother were in the house watching TV in a room on the first floor of the building.

“Yosra was watching the news – she was very affected by the news she was watching. There had been news that there was a shahid (martyr) in Nablus. There was a lot of interference with the TV.”

According to the Al Mezan Centre for Human Rights, interference with television sets is a telltale sign that drones are nearby.

“I was looking out of the window for my sons as I was afraid of the bombing. I wanted to call them. Then two rockets were fired into the room we were in and the room next door. Lots of shrapnel flew into the street outside.
I turned around. My daughter stood up. I said, ‘daughter, are you alive?’ I walked over and took her hand. I thought everything was going to be alright, then Yosra fell down. I was trying to get out of the room and see if Yosra was alive or not. I was shocked, the smell of the rocket was everywhere. I couldn’t find the door. I had been hit.”

Yosra was taken to Al Shifa hospital but died from her injuries. Mona lost a chunk of her leg and had to go to Turkey for treatment.

According to Al Mezan, minutes after the attack on the Shawa family’s home, her neighbours gathered in the street outside. A second attack by an Israeli drone killed three of these people: 56 year old Sakher Bulbul, 40 year old Mustafa Ihjella and 21 year old Mahmoud Al-Zhori; a further four people were injured in the attack.

Basil was out at his shop. He heard noises from the direction of his house and then heard over the radio that there had been an attack; he rushed home. He gave us a copy of the video from his mobile phone of the scene on the street as he arrived home – it can be viewed here.

Human rights workers came to examine the rocket. Al Mezan later determined that the rocket must have been fired by an Israeli drone from the accounts of the survivors and because of the amount of damage that it caused, which was far less than would have been caused by an attack by an F16 plane or Apache helicopter.

The Palestinian Centre for Human Rights is representing the Ash Shawa family in trying to lodge a case in the Israeli courts over their daughter’s death. Basil showed us a letter his lawyer received from the Israeli military about the case. It reads: “My respectful friend. Following your memo above claiming that on 20/11/2012 4 citizens were killed due to an Israeli air raid directed at Basil Shawa’s residential apartment. We inform you that the accident has been inspected by the General Military Prosecutor, and after the investigation it was clarified that no criminal violation took place, and there is no suspicion of the violation of war laws.”

Basil is not convinced by the prosecutor’s investigation:

“The death of my daughter was a war crime by the Israeli military. There is no excuse for it. When you have an 18 year old daughter that is a dream and that dream was killed. She was my only daughter. Campaigners must prevent these Israeli war crimes that kill our dreams and kill our children. When will it stop? Our case shows that Israel does not care about international law. People should take note.”

The Ash Shawa family, along with other families who lost loved ones during the 2012 attack, are still trying to take a case in the Israeli courts over their daughter’s death. Basil told us that the Israeli courts have been placing hurdles in the way of the families seeking justice for their loved ones:

“The Israeli courts wanted to charge us to lodge each case. However, two months ago, after pressure from the United Nations, the court said the case could start without payment, but we don’t yet know if it really will go ahead.”

The first recorded use of an Israeli drone to help piloted warplanes bomb targets (target acquisition) was in 1982 in the run up to the Israeli invasion and occupation of Lebanon. According to Al Mezan, the first recorded use of an armed drone by Israel was in 2004. The experience gleaned during years of military repression has made the Israeli arms industry the largest exporter of drone technology in the world. Israeli arms companies have sold drones to at least 49 countries.

Elbit’s UK locations can be viewed here. A coalition of protesters have been organising protests outside Elbit’s manufacturing facility in Shenstone, Staffordshire.

The Watchkeeper is being tested at Parc Aberporth facility in West Wales. Military testing is being carried out at Boscombe Down in Wiltshire. Campaigners in South Wales have been protesting for years against the flying of drones at Parc Aberporth, but there is a need to build a concerted campaign against the military testing of the Watchkeeper in Wiltshire.

In 2011 a group of grassroots Palestinian groups called for a two-way arms embargo. This means an embargo on arms sales to Israel and on purchases of weapons from Israeli companies until Israel abides by international humanitarian law. The Palestinian Boycott National Committee wrote at the time:

The campaign recognises that buying arms from Israeli companies fuels Israeli militarism and strengthens the occupation and siege. In the UK there is a call for campaigners to pressure their representatives to support a two-way embargo: end all contracts with Elbit Systems and Elbit subsidiaries; end all arms trade with Israel; and suspend the EU-Israel Association Agreement and all EU research funding for Israel’s arms companies. 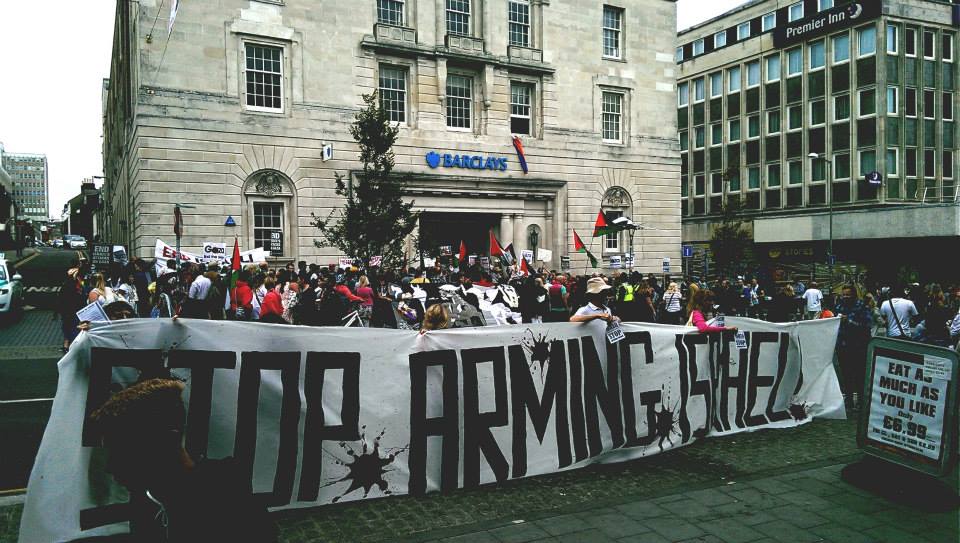 The Palestinian civil society call for Boycott, Divestment and Sanctions demands action to persuade the investors in companies complicit in Israeli militarism to divest their shares. Barclays PLC is named as the owner of over 50,000 shares in Elbit Systems.

Campaigners have been calling for Barclays to drop their shares in the arms trade for years. On May 4th 2014 anarchists in Cardiff held a picket of a Barclays branch that caused the bank to lose a day’s trading. There is a need for concerted action to persuade Barclays to have nothing to do with shares in Elbit.

‘There must be a response’

Mona told us: “We always dream about Yosra. We cannot forget her”.

We asked Mona if she has any message for the solidarity movement. She paused, then explained:

“If other people were us what would they do? There must be a response to what happened to us, now that a lot of nations are with us in solidarity.”