On October 15th, another mass demonstration against the arms trade will be held in Brighton. The Smash EDO campaign is calling for groups from around the country to come to the ‘Smash EDO, Shut ITT’ demonstration, aimed at closing down the Brighton arms manufacturers.
EDO MBM, who have recently been taken over by ITT, manufacture bomb release mechanisms for fighter aircraft. The company has a contract to provide parts for the Paveway III and IV system of munitions with Raytheon. The Paveway system was the most used munition in the US-UK aerial bombardment of Iraq. EDO MBM/ITT also provide weapons to the Israeli airforce.
Smash EDO held a ‘Carnival Against the Arms Trade’ last June, which saw over 600 people marching through Brighton to EDO MBM/ITT. The demonstration reached the factory despite police use of force in an attempt to confine the demonstration to a metal pen. Anti-arms trade campaigners came from all over England, Scotland and Wales to join the demonstration.
For more details, see www.smashedo.org.uk/shut-itt.htm.
Original article at http://www.corporatewatch.org/?lid=3137 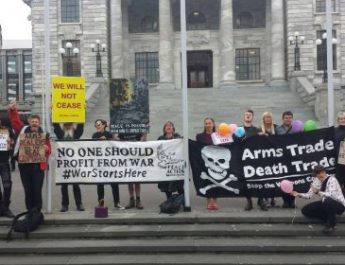