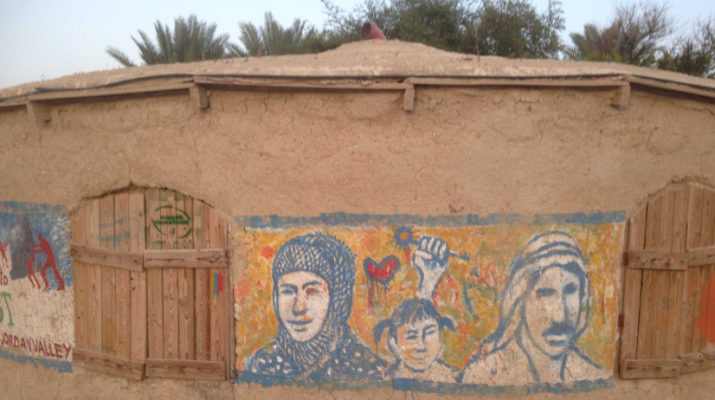 The situation in the Jordan Valley is very serious. Since 1967, the Israeli military occupation has been gradually attempting to annex the area (which is 28% of the occupied West Bank). Comments made by Netanyahu in 2019 have left us in no doubt about their intentions. On the ground they are seeking to control more and more of the Jordan Valley by expanding their illegal Israeli colonies. They are trying to drive Palestinians from their land through house demolitions, movement restrictions, curfews, arbitrary arrest and detention, land confiscations, denial of access to water, electricity, health and education.

In 2003, several community members in the Jordan Valley came together to try to build a community-based campaign to defend the indigenous community’s presence. Today, the campaign continues to grow, and has spread to all of the Palestinian communities in the Valley. As a grassroots campaign we rely entirely on community members volunteering their time and energy, and support from individuals and organisations that support our aims and activities.

We have no budget to speak of, or any sources of funding, except in the rare cases that a person or an institution comes forward willing to fund a project that the campaign has undertaken.

Since its inception, the campaign has been open to working with any individual or organisation that shares its political analysis of the problem facing the Palestinians of the Jordan Valley and shares the commitment to maintain and strengthen Palestinian presence in the Valley.

The campaign’s activities centre around actions which strengthen the steadfastness of Palestinians in the Valley. Our work varies, depending on the needs and priorities of the local communities, but in recent years we have:
• Supported villages such as Fasayil and Ka’abne to build community schools
• Helped several different communities to run water pipes to their local area
• Mobilised local communities around rebuilding structures destroyed by the Israeli occupation
• Built roads so people can more easily access their homes
• Mobilised and educated Jordan Valley communities about the traditional methods of building using homemade hay-and-clay bricks

The second major task of the campaign is raising awareness about the plight of Palestinians in the Jordan Valley and the urgency of supporting them both at the national and international level. This is particularly important given that it is a topic most often ignored in discussions about Palestine and the occupation.

This advocacy work is carried out through:
• Preparing written, audio, and visual materials that advocates of Palestinian rights can use
• Trying to attract media attention to the situation in the Jordan Valley
• Offering eyewitness tours for visitors to Palestine so they can see for themselves what is described above
• Persuading international agencies to operate in the Jordan Valley, to provide the services most needed by the local community, and to monitor the effects of the Israeli policies and practices of the people and the land.

The campaign continues to face several challenges. One of the first obstacles to mobilising the local community is the large distance between the communities of the 150km long Jordan Valley. There is no cost-effective public transport available to Palestinians in the Valley, including the campaign organisers. While dealing directly and in-person with community members is the ideal means of communication, the use of phones and other communication technology is also very expensive, since there is no Palestinian communication infrastructure outside of the Area A and B towns and villages, and the Israeli alternative is costly. The internet is completely useless as a means of communication within the Valley given that only an extremely tiny minority has internet access. The dearth of sources of funding that would allow for the campaign to sustain itself as an independent grassroots initiative is a further challenge.

Despite these challenges the campaign continues based on the determination of the people of the Jordan Valley to remain steadfast on their land, and in the ongoing struggle to regain the land and resources taken from them, the Palestinians of the Jordan Valley.