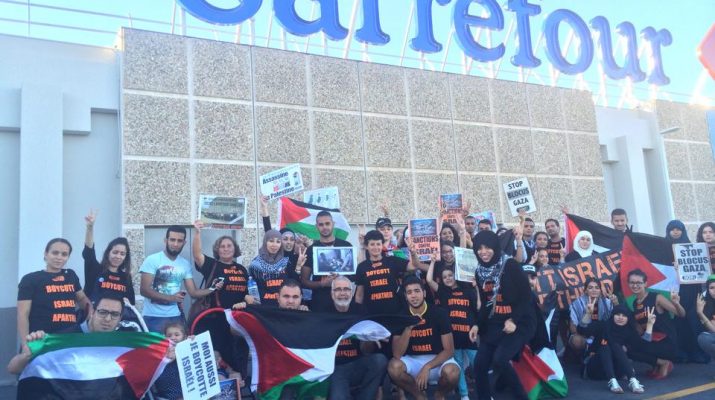 A French court has acquitted 12 Boycott, Divestment and Sanctions (BDS) campaigners of “discrimination and inciting hatred and violence toward a group or nation,” after they called on customers at two branches of Carrefour to refuse to buy Israeli goods.

The court verdict, in Mulhouse on 15 December, concerned Palestine solidarity protests that took place in September 2009 and May 2010 (see here for more details).

The case was brought by several prosecuting bodies including National Bureau of Vigilance Against Anti-Semitism (BNCVA), the France-Israel Chamber of Commerce and the (International League against Racism and Anti-Semitism) LICRA.

Earlier this year, another group of BDS activists won a similar case in Paris . There, the judge said: “Since the call for a boycott of Israeli products is formulated by a citizen for political motives and it is part of a political debate relating to the Israeli-Palestinian conflict, a debate concerned with a matter of general interest with international significance, the offence of provocation to discrimination, based on the fact of belonging to a Nation, is not constituted.”

The state has appealed the verdict in that case and another case is scheduled to take place in Pontoise, a suburb of Paris, in March 2012, when those involved in a mock-trial of BDS activists outside a Carrefour store will be tried.

These failed prosecutions of BDS activists are part of an international trend to use allegations of racism to try to criminalise BDS actions. In the UK, an activist accused of spraying BDS messages on a branch of Tesco in Swansea in 2009 was charged with racial abuse before the case was dropped.
Campaigners who disrupted an Israel Philharmonic Orchestra concert in Edinburgh, in 2009, were charged with “racially aggravated conduct” but the sheriff threw their case out of court saying:

“if persons on a public march designed to protest against and publicise alleged crimes committed by a state and its army were afraid to name that state for fear of being charged with racially aggravated behaviour it would render their rights under the [European Human Rights] Convention worthless.” Their placards, he said, would have to read “Genocide in an unspecified part of the Middle East” or “Boycott an unspecified state in the Middle East”.

In Israel itself, the Knesset passed the “Bill for prevention of damage to the state of Israel through boycott” in July 2011. This new law penalises any person or organization that calls for an “economic, cultural or academic” boycott of “a person or other party” because of their relation to Israel, Israeli institutions or “any area under [Israel’s] control”.

This move by the Israeli state to repress its own citizens is another example of the threat the international BDS movement is seen as posing to Israeli apartheid and occupation.