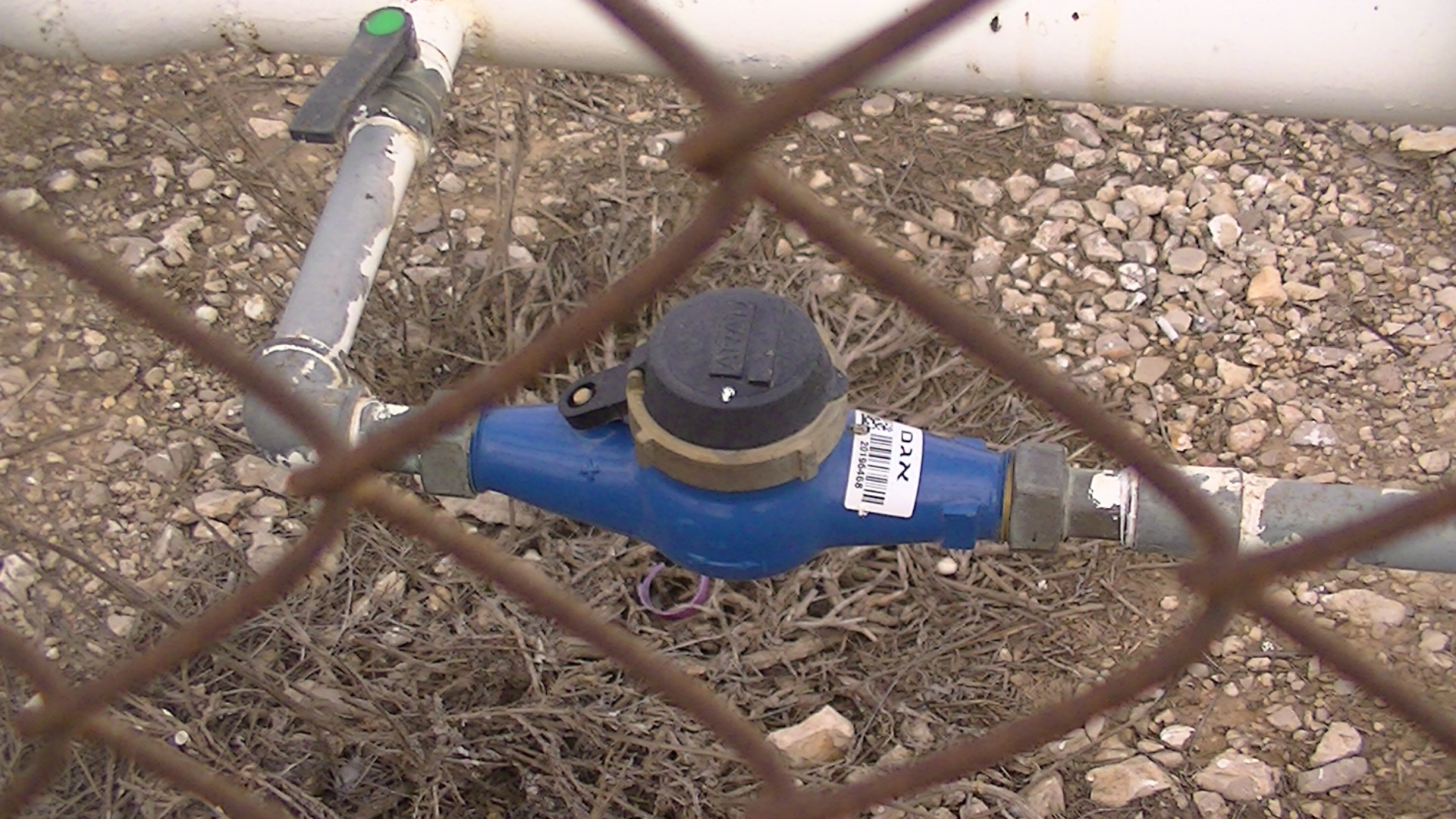 Israeli water company Arad, which has a £7.1 million contract to supply water meters to Southern Water, and is trying to expand further into the UK market, supplies water meters to Ma’on, one of the most violent settlements in the South Hebron Hills region of the West Bank.

In February 2013 Corporate Occupation researchers photographed a water installation outside the gates of Ma’on with meters installed by Arad (see photo below, a nearby sign read “World Zionist Organisation, Settlement Division”.)

The settlement of Ma’on is illegal under international law and Arad’s supply of water to the settlement facilitates the consolidation of the settlement on land stolen from Palestinians. In contrast, eight nearby Palestinian communities are threatened with expulsion by the Israeli military and are denied a connection to the water supply. Even water cisterns are subject to constant demolitions by the military (see here).

The villages around Ma’on have been threatened with expulsion since the Israeli army established a military training area, Firing Zone 918, on their land in the 1980s. Firing Zone 918 is an area in the South Hebron Hills next to the Green Line, where twelve Palestinian villages are located. In 1999 these villages were evacuated by the Israel military. After the removals, Palestinians obtained legal permission to return to live on their land. In July 2012 Ehud Barak, Israel’s Defence minister reopened the case at the High Court demanding the evacuation of eight of these villages due to ‘military reasons’.

The settlers of Ma’on have played a central part in this policy. On 21 May 2013 settlers from Ma’on attacked a Palestinian shepherd close to the neighbouring village of At-Tuwani, causing him to be hospitalised. On May 11 unidentified settlers cut down over 60 Palestinian olive trees and set fire to a field of wheat. Children from At-Tuwani, who have to walk below Ma’on to get to school, have been attacked by settlers so many times that they now receive a military escort. In February this escort left them before they reached school and the children were attacked by slingshot wielding settlers.

In providing services to the illegal settlement of Ma’on Arad is supporting the campaign of violence being waged against the people of the South Hebron Hills.

In Sussex activists have begun a campaign against Southern Water’s contract with Arad. Southern Water adverts have been coated with stickers denouncing the contract and Keith Taylor, the Member of the European Parliament for South-East England has written to Southern Water calling for it to demand that Arad “cease all its activities in the illegal settlements. If this is not possible then Southern Water should terminate the contracts as soon as possible.” Mr Taylor has requested a meeting with the CEO of Southern Water to discuss termination of its contracts, Brighton and Hove Palestine Solidarity Campaign have written a letter in the same vein.

Arad is trying hard to expand its European market. We would urge campaigners to ensure that the company is not able to acquire more lucrative European contracts. In 2011 Arad provided pressure sensors to the Welsh Water Utility, we would urge Welsh campaigners to push for the utility to sever connections with Arad.

Southern Water can be contacted here