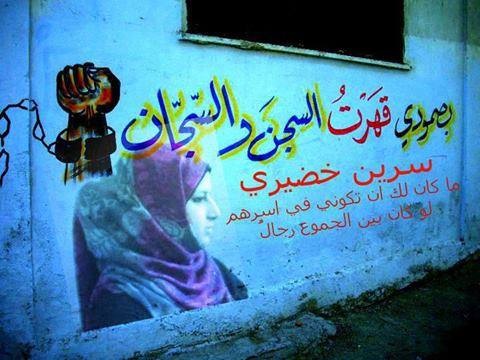 UPDATE: Sireen has been released!

Corporate Watch is calling for solidarity with Sireen Khudairy, a 24 year old Palestinian teacher and supporter of non-violent activism. To read our previous article about Sireen click here.

In Summer 2013 Sireen was arrested in the West Bank, transferred to Israel and detained in Al Jalameh prison, which receives services from the British-Danish company, G4S. Sireen was arrested again at 4am on Tuesday 7th January 2014. According to reports she has been taken to Huwwara military checkpoint and later to Salem military court. This may be a precursor to further detention inside Israel.

The transfer of Palestinian detainees from the West Bank into Israel is illegal under the Geneva Convention, which states that prisoners arrested within an occupied territory should only be imprisoned within the occupied territory. In providing services to Al Jalameh, G4S is complicit in these breaches of international law.

Sireen’s arrest follows 8 months of harassment by the Israeli military. She was previously imprisoned from May to July 2013, and has been subjected to frequent harassment ever since. See further details here.

Sireen has been active in denouncing Israeli abuses in the Jordan Valley through Facebook and other tools of communication. It is likely that the reason for the ongoing harassment of Sireen is her internet activism.

Please take action against the detention and harrassment of Sireen.

– Hold protests or boycott actions in support of Sireen.

– Ask that your government contact the following people and institutions, asking that Israel be made to account for its harassment of Sireen Khudairy, and to stop all further harassment of her and her family: