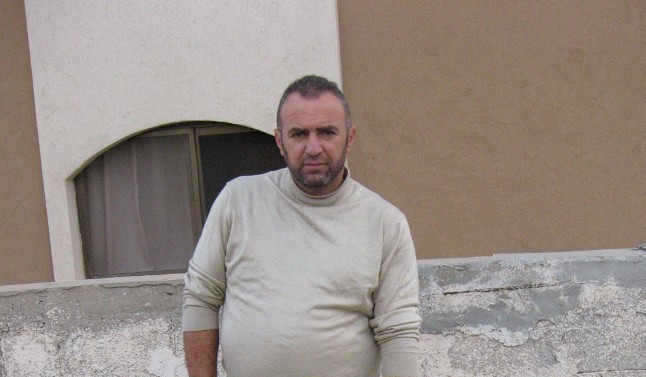 This is part five of our series of articles focusing on what life is like for people in Gaza living beneath Israel’s military drones. To read part one, two, three and four click here.

We met Abdullah and Ebtihaj Al Habil at their house to the North of Gaza City in December 2013. Abdullah told us that he has been attacked by Israeli drones on two occasions. The attacks have forced them to abandon their home and find new accommodation.
The first attack came in 2009. Abdullah told us:
“My family’s house is near here. We were all there when the bombing started. We decided to come here and get some clothes and then we were going to go to the UNWRA school in Shati Camp. I parked the car opposite the house and walked toward the house alone. I got a bag of food and clothes from the house. I could hear the drones in the sky above making a humming sound. I ran with the bag from the house toward the car. They fired. I heard the rocket. I looked round and could see it flying towards me. I jumped out of the way, hit a wall and a splinter from the rocket hit my leg.”
Abdullah showed us his leg, which had a chunk of flesh missing. 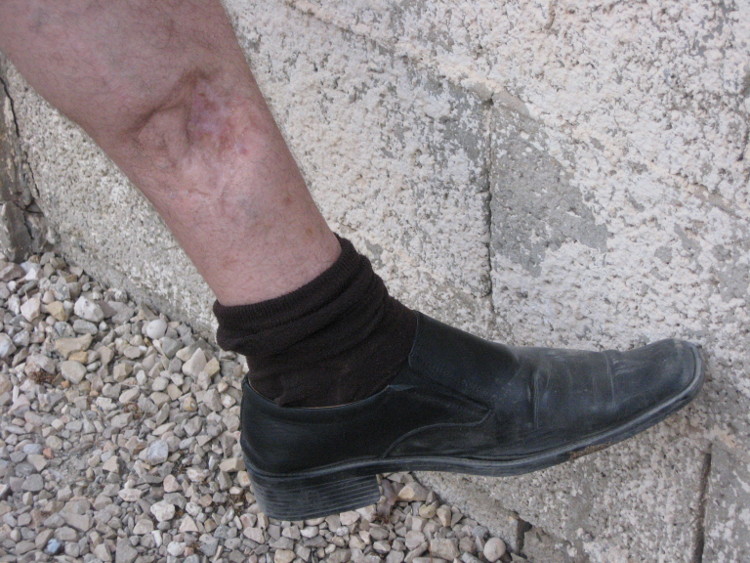 The second attack came in 2012: “Three pillars of my house were destroyed by firing from the sea, an Apache [helicopter] fired three rockets at the house and machine gunned our water tanks. Then a drone strike hit the roof.” He shows us where the drone hit. Abdullah tells us that “the wall of the house was damaged”. He hasn’t been able to afford to repair it and the roof leaks when it rains.

“The attack happened after midnight, we heard the firing from the Apache and took our five children to take cover in the stairwell. They were firing white phosphorous munitions so we hid under soaking wet sacks to protect ourselves from burns. We could not go out of the house because the warships were firing into the street. We tried to call an ambulance but the phones were blocked. We heard the drone attack happen after the Apache.”

“We know that a drone fired on us because one of the three rockets did not explode. The rocket was one metre long, two inches wide. The middle is made of plastic. The two tips were made of iron and at the end was a propeller.

“Our house was hit by white phosphorous ammunition [probably from the ships]. We tried to put it out but we couldn’t, it just kept burning.

“In the early morning the house across the street was hit by an F-16, killing three people.

“When we came back to clean up the house after the attacks we found that papers had been dropped warning people to leave their homes. We had not seen the papers before the attack started. There was no reason given for the attack on our house.”

Abdullah tells us, “I paid $50 000 to repair the house. The construction materials were very expensive because of the siege. The government and UNWRA promised us support but it did not come. They just gave us some food and mattresses when we went to the UNWRA school. I had to buy new furniture, a TV, tiles for the bathroom and repair the ceiling. However, we no longer want to stay here. It is too dangerous. We are living somewhere else.”

According to Abdullah: “Israel depends on drones more and more. More than any other warplanes. In 2009 and 2012, they were used for both surveillance and for attack and they were sending information to help the [Israeli naval] ships target their missiles.”

In 2011 a group of grassroots Palestinian groups called for a two-way arms embargo. This means an embargo on arms sales to Israel and on purchases of weapons from Israeli companies, until Israel abides by international humanitarian law.

During the most recent Israeli attack on Gaza, in which 2,191 Palestinians were killed, campaigners held demonstrations and occupations of branches of Barclays bank all over the UK, including in Aberdeen, London, Brighton, Manchester and Wrexham.

This explanation doesn’t get Barclays off the hook. The practice of ‘hedging’ is still a form of investment and in agreeing to purchase the shares in Elbit on the behalf of their customers the bank is ignoring the war crimes being carried out against people like Abdullah and Ebtihaj using Elbit’s equipment. 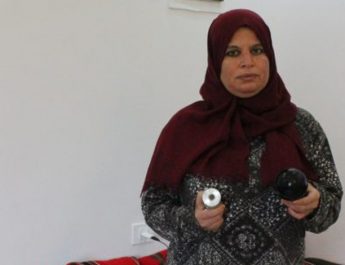