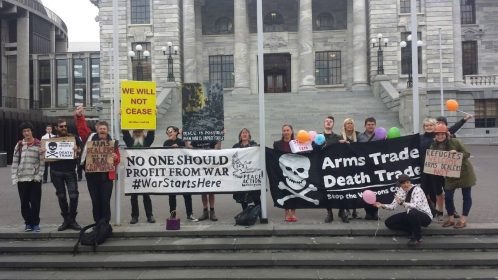 In November 2016, activists in Aotearoa/New Zealand were on the streets to target a weapons expo in Auckland, and arms dealers found themselves locked out of the venue by the blockades. You can read more about their actions on their blog, and in Auckland Peace Action’s report.

In January 2017, Eliza Egret and Tom Anderson met up with Sean and Laura from Peace Action Wellington (PAW) in Aotearoa/New Zealand and PAW explained the tactics that they have used to confront the arms trade. This interview is the first of two that will be published about anti-militarism in Aotearoa.

Can you tell us about Peace Action Wellington (PAW)?

PAW was formed in opposition to the war in Iraq in 2001, so it has been going for a while now. There’s recently been changes in the membership and power dynamics within PAW. More of us are part of the same friendship group now; we hang out together. Recently, we’ve been trying to focus on more fun and creative actions and establishing relationships with other activist groups in Aotearoa and around the world. At the protests against the New Zealand Defence Industry Association’s annual forum – a weapons expo – in Auckland in 2016, it felt like there was an effective, united front of different groups working together, such as the No Pride in Prisons, the Pacific Panthers, and the Quakers. Two years ago, in 2015, the weapons expo in New Zealand was held in Wellington.

Was PAW involved in mobilising against it?

Yes, we were at the Wellington arms fair. 2015 was the first year in many years that there were protests against the arms fair. It was at the TSB Arena and there were roughly 150 to 200 people at the demonstrations. The TSB Arena has multiple access points and we knew that we couldn’t shut the whole thing down so we had people at the front of the building, and also a small group of people locked on. There were heaps of people attending the arms fair in army uniforms and suits looking pissed off and we definitely delayed people getting in.

We did creative stuff, and we also had music and Food Not Bombs giving out free food. Radio NZ was broadcasting from inside the arms fair and we were listening to the audio of what they were broadcasting. We tapped on the metal building with small metal objects like coins and these sounds were really loud inside! We also had a noise demo on the second day at the arms dealers’ awards dinner. There were activists demonstrating, making noises and banging pots and pans.

How successful were the 2015 protests against the Wellington arms fair?

The actions were very successful in reinvigorating peace activism in Wellington. There was heaps of support from new people, and there was a radio station – Radio Active – which came down to the protest and broadcasted. But in terms of shutting down the arms fair, we could have been more successful.

We also had negativity on the internet and from the public, and the police arrested a lot of people, targeting activists that they knew. We even had an undercover cop at the public briefing the night before. We’re going to court for this protest in February. We’re charged with Obstruction and Trespass, and there were also a couple of people charged with Assault Police. Some people have already plead guilty and they got community service. About half of the people got Diversion on the Police Diversion Scheme. This is where they nominally admit guilt and say “yes, i did this and I’m sorry”. Sometimes they have to write an apology, sometimes they get community service or a fine.

All of us who were charged on the first day of the demonstrations had intense bail conditions and we weren’t allowed to go within 100 metres of the protest the next day. We also weren’t allowed to associate with one activist who is well known to the police and who was picked out by them.

How much support do demonstrations usually get in Wellington?

You’ve started protesting against an arms company in Wellington. Can you explain what you’ve been doing?

There’s an arms company called Mass Zengrange in the Hutt [near Wellington] that manufactures fire control systems, targeting systems for mortars. The company says that their weapons parts are used for ordinance/bomb disposal. They were interviewed by Radio NZ at the arms fair in 2015. We did an official information act request on their permits and found out that they were selling to Saudi Arabia and to the Gulf Cooperation Council. They also offer training on improvised explosive devices (IEDs).

Their office and factory is on the verge of a residential area and we have started leafleting and putting up posters in the area. At the first demo five of us went into the company’s lobby dressed as Death and presented them awards for human rights abuses. We had a wheelie bin sound system and party poppers, and from our perspective it was quite comical. We got assaulted by workers. One guy, Peter Alkema, punched Sean in the face. A man called Greg Marsden runs the company and he is an ex-British army officer. He pushed Sean over and threatened him. One of the workers even followed us in the car and filmed us.

After we left the factory we were arrested for trespass and Sean was arrested for assault. They gave everyone else pre-charge warnings and those people weren’t allowed at the company premises. They only charged the two of us and our bail conditions state that we can’t go onto the street where the factory is.

We have had one other demonstration against the company since then, where we read out speeches and played music.
The factory has since changed its security practices. They have changed their Linked In profile visibility and they are talking to the cops. The idea is to have a sustained campaign against the arms factory. We are trying to get the factory well known in the community. There’s a peace group in the Hutt that we’re trying to get involved in the campaigning and we’re also leafleting the community.

Can you tell us about other campaigns you did in 2016 and the tactics that you used?

We’ve primarily been focusing on creative actions and it’s been interesting for us to hear the change in the feedback that we’re getting. It’s also a lot more fun for everyone involved. There is a lot of fatigue in the group over getting arrested and court appearances.

We did a creative action against ANZAC Day, the primary military remembrance day. In the last twenty years the narratives around ANZAC Day have changed a lot in Aotearoa; it’s become more nationalist and now encompasses all the bullsh*t, colonial wars Aotearoa/New Zealand has been involved in. The government has pumped a lot of money into it. In 2016, we made models of conscientious objectors and strung them up along the waterfront and the Civic Square. The models were strung up with hands tied behind their backs in the field punishment number one position, which is a well-known depiction of conscientious objectors here. We are still getting quite a lot of positive feedback and media coverage from that and one of the models is now displayed in Wellington Museum.

We also did an action focused on refugee issues where we put life jackets on statues. We were asked to talk at a high school because of this action. One time we also made drone shadows on the ground with a spray can, and another time we had a navy ship piñata.

We also demonstrated a couple of times at the Australian Embassy in 2016 against the offshore detention camps on Manus island [in Papua New Guinea] and Nauru island [in Micronesia]. One demonstration was held to coincide with the 100th day of protest that was happening at one of the camps. There were other groups involved in the second demonstration and we protested against the conditions in the prisons. We tried to do a banner drop but someone called the cops. The police officer let us take a photo of it before he took it! We also had a big inflatable message in a bottle at the embassy.

In the summer of 2016 we went to the MOD when the White Paper for defence spending was announced. We made a cardboard ship and we had people in the middle. It was a small demonstration of about ten people and we read out an announcement in the foyer of the building, talking about defence spending, addressing the Minister of Defence and saying that there were much better things to spend money on. Laura was arrested immediately after they said that we had to leave or that we would be arrested for trespass.

We also made a video about Kiwi Saver, a semi-compulsory investment scheme. There was a lot of public outrage and media coverage about the schemes investing in the arms trade. We decided to make a video response to the situation. We went into ANZ, BNZ and Westpac banks dressed as arms dealers, with fake blood money and photoshopped bank brochures. The banks have the power to say that they don’t want it and some banks divested.

Also in 2016, we organised a picnic to coincide with the navy’s fancy dinner to celebrate the Battle of Trafalgar (The New Zealand navy is still very white and colonial and it’s f*cking bizarre that this is celebrated). We advertised the picnic and a noise demo for it. The navy didn’t turn up but we had the picnic anyway!

What is most interesting here in Aotearoa is where anti-militarist activism intersects with decolonisation activism. So we might work with the Pacific Panthers [a group of Polynesian activists inspired by the Polynesian Panthers and the Black Panthers], for example. Other than that it’s unfortunately mostly a white middle class movement.

Laura and Sean are two of sixteen anti-militarists who are on trial this week for protesting against the 2016 Wellington Arms Fair. The trial runs from 13-17th February.