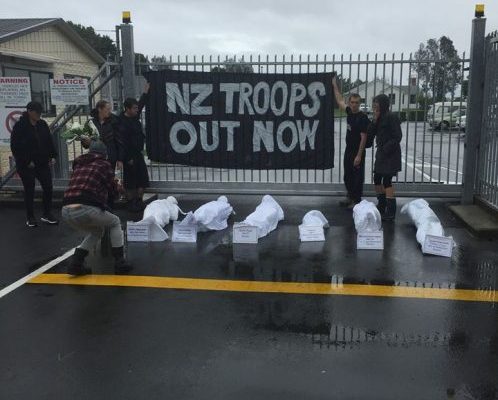 In late 2016, Auckland Peace Action (APA) organised a successful week of action against the New Zealand Defence Industry Association’s annual weapons expo in Aotearoa (New Zealand). Arms dealers found themselves locked out of the venue by the blockades. You can read more about their actions on the Peace Action Wellington blog, and in APA’s report.

Tom Anderson – an anti-militarist writer from Shoal Collective – interviewed Valerie Morse from APA about the group and the week of action. This interview is the second in a two part series about anti-militarism in Aotearoa. See part one here.

When was Auckland Peace Action established, and what are the aims of the group?

Auckland Peace Action (APA) was formed in May 2016 specifically in response to the annual weapons expo moving here from Wellington. We’ve got five aims that range from the very broad to the very specific and reflect the politics of the group. They are:

1 – Raise public awareness about the weapons expo, the wider military/industrial complex and New Zealand’s role in the War on Terror.

2 – Build and sustain an active movement of people opposed to war and militarism.

3 – Disrupt and shut down the military-industrial complex in New Zealand and globally through non-violent direct action and respecting a diversity of tactics.

4 – Build solidarity across movements by recognising the interconnected and disastrous consequences of war, colonialism and capitalism for the majority of people in New Zealand and the world.

5 – Stand for a world free from oppression and envision a world with peace, justice and self-determination. We envision a demilitarised and decolonised Pacific.

What kind of people are involved in the group, and how many?

The group has varied in size and composition over the last year, and a core group of people has really solidified in the past few months who are strongly politically aligned. These include Māori, Pacific, Arab and Pākehā (non-indigenous New Zealanders largely of European ancestry).

Can you tell us about the mobilisation against the arms expo in Auckland last year? What kind of actions were planned?

First, its useful to provide a bit of background for context. The weapons expo was moved to Auckland because the New Zealand Navy was hosting a huge “celebration” for its 75th anniversary. This was a crudely cloaked recruitment and public relations exercise. Part of that event also included the visit of a US warship – the first in 33 years – a major rapprochement between the US and New Zealand militaries. Following the passage in 1987 of New Zealand’s nuclear-free law, there was a requirement for any visiting military to provide assurances that no nuclear weapons or nuclear propulsion was aboard any vessel. The US Navy was unwilling to do this, citing its “neither confirm nor deny” policy regarding the presence of nukes. The US-NZ military relationship has been growing stronger for more than a decade now (New Zealand has been in Afghanistan for 15 years now), and the ship visit was really a culmination of the long-standing work of conservative forces in both the US and New Zealand to resume normal relations.

We dubbed this Navy “celebration” and weapons expo as the government’s “Week of War”. In response to that, we created a “Week of Peace”, a series of events aimed at shutting down the arms trade, and challenging the US military on the sea. Events were on every day that week: non-violent direct action training, a blockade of the arms fair, an on-water flotilla of peace boats, an indigenous anti-colonial, anti-militarism ceremony, a prayer service, a noise picket, and a Grannies for Peace presence. The focus of the week was the blockade of the weapons expo on the Wednesday (more about that below).

The ocean-bound flotilla which was intended to form a blockade of the warships entering Auckland harbour was significantly downgraded as the warships redeployed in an obvious act of propaganda to the Kaikoura earthquake (in the South Island), and thus no glorious entry took place.

We heard that you worked with a range of groups. Who were they and how did that go?

The organising of the Week of Peace was strictly within the ambit of Auckland Peace Action: our approach was not so much to build a formal coalition as to ask other groups and organisations to stand in solidarity with us. We felt this was a better approach as we were the only group really working specifically around issues of New Zealand militarism, war and weapons trading. We went far and wide to gather support: unions, church groups, political parties, university student groups and grassroots community groups. This was a successful model for us as we could ask groups for specific things, and people could come with what they could to support us.

There were some events that occurred somewhat autonomously within Auckland Peace Action with people getting other sub-groups together to organise under our banner and guiding principles. These were primarily driven by individuals within the group with particular interests, for example, in a faith-based response.

We heard there was a successful blockade of the fair, can you tell us about that?

The blockade was amazing: we blockaded for 8 hours and kept out about 350-400 of the delegates. It started at 8am, on what was initially a wet, cool Auckland morning. The police and security had erected a large fence around the front of the building, and the rest of the building is surrounded by water. After several groups of blockaders were in place, another large group arrived and some “argy-bargy” with the police and security happened as the blockade settled in. It was clear that for the blockade to be effective we would have to get the fence down – and down it came! Soon hundreds of people were standing and sitting in front of all of the
entrances. While many people had initially come only to support the blockade, because of the tremendous success and relative safety people felt, nearly everyone actually got into the blockade lines.

At the end of the day, a spontaneous dance party erupted to the playing of a Venga Boys song on our sound system!

What was the policing like at the demo? Were there arrests? Or surveillance?

It’s hard to know exactly what the police and security instructions and tactics on the day were. The security (a private firm) were absolutely brutal and lots of peace activists were assaulted throughout the day. The police had shipped in more officers from out-of-town, and they, too, were brutal: many people were kicked, punched or sexually assaulted by police during the blockade.

One particular incident may have transformed the police response several hours into the blockade. At one stage, police and security surrounded a weapons expo delegate in order to escort him in. In their haste to get through the blockade, they came around a corner and nearly trampled a mother and two very young children who were sitting in the blockade line eating some food. The crowd was obviously very angry, and voiced that to the police. From that stage on, the police response changed. They were overheard telling delegates that it wasn’t safe to go in and that they couldn’t do anything to help them.

The police released a press statement at the end of the day claiming we had congratulated them on their behaviour. This was not true. Rather this was a bit of preemptive propaganda to shape any narrative that might have emerged about police brutality.
In terms of surveillance, there were lots of police photographers. In contrast to the 2015 weapons expo (where the police did not have any photographers or videographers), the Auckland event was heavily recorded by police.

There were two arrests that occurred in the days following the blockade for incidents on that day. One person was charged with assaulting a police officer. We are continuing to support that person as they go through the court process. Arrestees from the 2015 protests against the expo are all free and we’ve gotten $3.5 thousand from the police for legal costs!

You mentioned sexual assaults. Can you elaborate? Is this commonplace in New Zealand?

I am aware of the police sexually assaulting women who are involved in blockades and other protests, mostly by grabbing their breasts.

How much support did you get from people in Auckland for the actions, and how many came and protested?

Over the course of the week, several thousand people turned out for different events. This was a great response given that most of these events are during the regular workday. There was huge support for the blockade, but there is considerable work to be done.

Overall, did you think it was a success?

The campaign around the weapons expo was definitely a huge success. The challenge is now to continue to build on that success to shut it down for good.

Other than the arms expo protests, does Peace Action Auckland take part in other kinds of resistance to militarism?

Auckland Peace Action was only formed last year specifically in response to the arms expo and warships visit. We have planned a wider campaign against military spending and will be out on Anzac day (World War One commemoration) to raise
awareness of the dangers of militarism and patriotism.

Do you think that there are ways that anti-militarists in the UK and Aotearoa can act in solidarity with one another in future?

We love solidarity with our international comrades! The best thing we can easily do is spread the messages about what is going on, mostly through social media. It would be great to have a more specific forum for activists to discuss tactical responses to arms fairs as well. We can also support each other with solidarity actions – demos, pickets etc.

And finally, do you know when and where the arms expo is next being held?

We believe the next weapons expo will be in Wellington in October or November 2017.

After this interview took place, APA held a blockade of the SAS base in Papakura to demand justice for those killed in Afghanistan. You can read more about their action here. To find out more about the group at aucklandpeaceaction.wordpress.com