The involvement of high-ranking Tory ministers at the DSEI arms fair highlights the thin line between government department and the arms industry.

British government ministers are scheduled to give keynote speeches to international arms dealers at DSEI — the world’s biggest arms fair — in London’s Docklands this September. The participation of high-ranking Conservative ministers once again highlights the thin line between government departments and the arms industry.

More than 34,000 people are expected to attend the 2017 event, including government officials plus military and police personnel from around the world. Some 1,600 arms exhibitors will also attend DSEI 2017, hoping to cement relationships, make deals, lobby governments and, ultimately, sell weapons.

It seems certain that Conservative Party ministers will not address the ethical issues around the sale of weapons. Rather, DSEI’s organisers state that they “have full collaboration and support from the UK Secretary of State for Defence and his ministerial team, and, once again, expect unprecedented levels of attendance from UK government Defence and Home Office ministers, service chiefs of staff and senior MoD officials at DSEI 2017.”

This reflects the British government’s support for the arms industry, which it sees as essential for maintaining Britain’s role as an independent military power.

Campaign Against Arms Trade have uncovered that at least seven people have worked in government at a senior level and have moved to or from arms and security companies in a “revolving door” between government positions and arms industry jobs.

Since 2010, Liam Fox has had 12 meetings with the arms industry, including with corporations BAE, General Dynamics, Raytheon, Thales and Babcock. One of Fox’s key roles as International Trade Secretary is to sign arms export licences, giving companies permission to sell weapons to different countries. Fox is, therefore, an important person for arms industry executives to maintain a relationship with.

Another of Fox’s roles is to cement post-Brexit relationships with states worldwide, and he has recently visited authoritarian countries Bahrain, UAE, Oman and Kuwait. All of these countries are “priority markets” for the British arms industry.

It doesn’t take too much searching to reveal Fox’s close relationships to the British arms industry. In 2011, Fox resigned from his role as defence secretary after it was revealed that he had allowed his close friend Adam Werrity to   accompany him to official meetings without proper security clearance.

The high-level meetings were held in Israel, UAE and Sri Lanka, among other places. Werrity had significant arms trade related financial interests and may have benefited from these trips.

Fox admitted: “I mistakenly allowed the distinction between my personal interest and my government activities to become blurred.”

Fox is extremely supportive of Israeli state militarism and he has made visits to Israel funded by Conservative Friends of Israel. A search of the government’s register of members’ financial interests reveals that in both 2015 and 2016 he received payments of over £5,000 in expenses to speak at conferences organised by the American Israel Public Affairs Committee (Aipac). Aipac is a pro-Israel US lobby group which, among other things, lobbies the US government to approve more arms sales and military aid to Israel.

Mick Davis of United Jewish Israel Appeal and Michael Lewis, who has been closely linked to the British Israel Communications and Research Centre, have also made donations to Fox.

Fox’s political commitment to zionism is likely to influence his decisions over whether to approve arms export licences to Israel.

When Fox was shadow defence secretary, he received two payments of £50,000 from venture capitalist Jon Moulton, whose firm Better Capital owned Gardner Aerospace until it was sold this year. Gardner has manufactured components for RAF Typhoons and troop transporters.

Wallace will give another of the keynote speeches at the London arms fair. He also has ties to the arms industry and has had a career in the armed forces. He was overseas director of the British arms company QinetiQ between 2003 and 2005.

QinetiQ profits from arming brutal regimes such as Saudi Arabia and also runs Boscombe Down, a major drone testing location in Wiltshire.

Fallon is also speaking at DSEI. He has attended some 70 meetings with the arms industry while working for the government, including 33 meetings with BAE, 21 meetings with Airbus and 18 meetings with Leonardo. The three corporations own arms company MBDA, with which Fallon attended another 19 meetings. This year, Fallon awarded MBDA £539 million in missile deals. He addressed MBDA staff, saying: “You are a role model here for the kind of partnerships we’ll be seeking in future: for our defence, for our manufacturing, and for our country.”

MBDA has previously supplied weapons to the Gadaffi regime and currently arms Saudi Arabia with missiles.

BAE, Airbus and Leonardo also jointly produce the Eurofighter Typhoon warplane. Sam Walton — who will appear in court in October for attempting to sabotage a Typhoon — attended a defence meeting five years ago.

“The head of UK Trade and Industry stood up in front of the arms industry to say: ‘We have to sell Typhoons’,” Walton stated.“The economics of it are crazy. Saudi Arabia is by far the biggest export market for Typhoons so we’re beholden to them. No-one will hold them to account as the UK is desperate to sell weapons.”

British government departments — including the Prime Minister’s Office — have attended almost 100 meetings about the Eurofighter Typhoon since 2011, suggesting that it is indeed intent on pushing the sale of the warplanes.

Fallon also backs BAE Systems in seeking a new contract with Saudi Arabia. “Are we supporting them?” he asked in April. “Absolutely. It’s something ministers have been pressing with the Saudi government for a number of years now.” BAE, the world’s third-largest arms producer, is a platinum sponsor of the DSEI arms fair.

At last year’s BAE Systems AGM, chairman Roger Carr defended his company’s arming of Saudi Arabia, despite its bombing of Yemen which has killed at least 11,929 people. He said: “We are not here to judge the way that other governments work, we are here to do a job under the rules and regulations we are given.”

BAE officials have attended over 1,000 meetings with the British government since 2008, and the company offers many clear examples of the revolving door between politicians and the arms industry. For instance, Oliver Waghorn, a BAE director, previously served as special adviser to then defence secretary Fox.

Another “revolver” is Alan Garwood, a director at BAE. He has been employed by both BAE and MBDA for the majority of his working life, and enjoyed a five year stint as the head of government department Defence Export Services Organisation (now replaced by the Defence and Security Organisation), where he advised on arms exports.

US corporation General Dynamics, the fifth-largest arms company in the world, is another platinum sponsor of the DSEI arms fair. In 2016, it employed the ex-head of the British army, Peter Wall, as a director. The revolving door between the corporation and government officials isn’t just confined to Britain, however.

General Dynamics is headed by Phebe Novakovic, who has worked both for the CIA and the United States Department of Defence.

Another telling example of the lucrative profits to be made by the revolving door between government departments and arms companies is the case of Elbit Systems and former British army General Dick Applegate, who went on to become chairman of Israeli arms company Elbit Systems’ UK branch in 2011.

According to Campaign Against Arms Trade: “In 2012, the Sunday Times exposed Applegate, recording him boasting of how he lobbied to secure £500m of government money for Elbit. Applegate was filmed admitting he’d applied pressure by ‘infecting’ the system at ‘every level’.”

The arms industry’s influence is all-pervasive at every level of government, influencing both foreign policy and public spending.

It means that instead of criticising abuses committed by regimes such as Saudi Arabia, the British government goes out of its way to sell them weapons.

As government ministers prepare to give their keynote speeches at this year’s DSEI, anti-arms trade activists are getting ready for a week of protest against the arms fair.

For more information on the campaign against DSEI go to www.stopthearmsfair.org.uk #StopDSEI 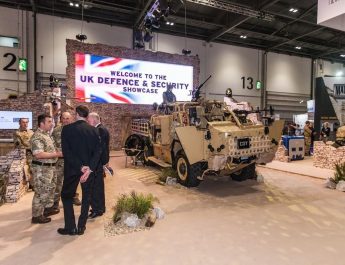