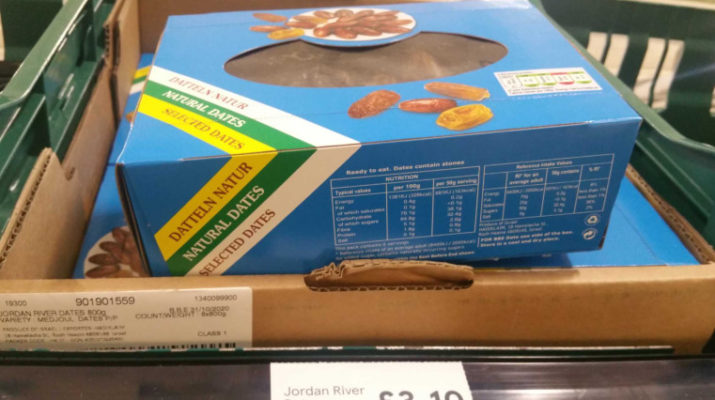 Hadiklaim date growers’ co-operative is Israel’s number one exporter of
Medjoul dates,[1] and one of the top global exporters.[2] The cooperative controls the King Solomon Dates and Jordan River brands.[3] Both brands
export dates from the settlements in the Israeli occupied Jordan Valley.
In 2017, Hadiklaim’s Yaniv Cohen told industry website Fresh Plaza that:

“The Jordan Valley has a unique climate and produces the best quality because of that. In 1982, Hadiklaim was founded to market the Medjoul dates. By now, the company has 16 packing stations in the Jordan
Valley. The season is from August until October. After that
the dates are sold from storage.”[4]

In the past Corporate Occupation has documented that Hadiklaim sources its dates from the settlements of Tomer and Beit Ha’Arava in the occupied Jordan Valley.[5] The company freezes its stolen dates, in order to ensure a supply outside of the season. It specialises in organic dates.[6]

In 2018, Corporate Occupation researchers entered a date packing house in the illegal Israeli colony of Gilgal, where dates were being packaged for export under Hadiklaim’s King Solomon Dates brand.

In September 2019, Hadiklaim’s Yaniv Cohen stated that the company supplies the world’s biggest supermarkets, including Tesco and M&S.[7] In winter 2019, we photographed Hadiklaim dates in both Tesco and Morrisons supermarkets.

Corporate Occupation has documented Hadiklaim produce being mislabelled as produce of Israel. In January 2013 Corporate Occupation obtained labels for Morrisons own-brand Medjoul dates from the Israeli settlement of Tomer in the occupied Jordan Valley. The exporter was Hadiklaim and the dates were labelled ‘Produce of Israel’.[8] Hadiklaim continues to supply Morrisons with own-brand dates.

Hadiklaim’s key markets are the UK, Netherlands, France and Germany.[9] It exports to more than 30 countries.[10] The company is beginning to export to Thailand,[11] Japan and South Korea. 12 In 2017 Hadiklaim boasted that it supplied almost all the UK’s major supermarkets.[13]

Every year, Muslims across the world break their Ramadan fast with Medjoul dates. Many Muslim Palestine solidarity activists have been campaigning for fellow Muslims to boycott King Solomon and Jordan River dates, as well as other Israeli brands.[14]

After consumers started to question the origins of Hadiklaim date boxes labelled ‘Produce of South Africa’, it came to light that Karsten Farms, a South African company, was exporting dates through Hadiklaim. After a three-year-long campaign by the Palestine Solidarity Alliance and BDS South Africa, Karsten announced in 2013 that they would sever all ties with Hadiklaim.[15]