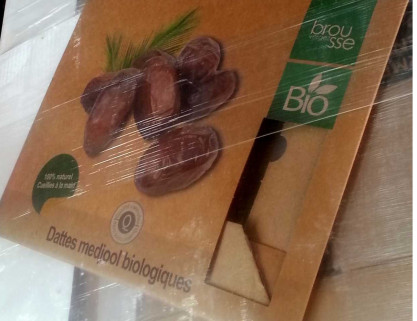 Brousse is a French company with a German subsidiary, supplying France and Germany’s supermarkets with dried fruit. Brousse products can be found in French supermarkets such as Carrefour.

In the summer of 2018, we photographed French company Brousse’s packaging for organic dates in a central refrigeration unit on land owned by the settlers’ Regional Council of the Jordan Valley.

We contacted Brousse twice, telling the company that we had seen its packaging in a settlement. We asked for a comment, but received no reply.

The packaging shows that the company is importing citrus fruits sourced from Mehadrin. It also states that Orsero citrus fruits are being imported to Italy by Italian company Fruttital Service.

The box is labelled ‘Origin: Israel’, despite the fact that it was packaged in Argaman settlement in the West Bank. This seems like a breach of European legislation on the labelling of goods from the Occupied Territories, in order to take advantage of the beneficial terms of the EU-Israel Association agreement.

Fratelli Orsero’s website states that the company closely manages and controls its supply chain,[1] meaning that it is fully aware that it sources products from illegal settlements.

We emailed Fratelli Orsero a number of times, asking the company to comment, but received no reply.

According to its website, Orsero distributes produce “in every corner of the globe, through a network of over 1,500 suppliers in more than 70 countries.”

We found packaging for Sahara Gold Medjoul dates in the illegal Jordan Valley settlement of Na’ama during our visit in 2018.

Sahara Gold dates are marketed by International Golden Foods in Illinois in the US.[1]