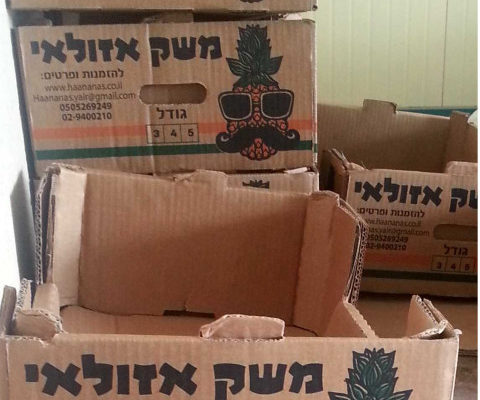 During 2018, we visited the settlements of Argaman, Na’ama, Mehola, Tomer, Gilgal and Beit Ha’Arava. We photographed the signage and packaging of a number of Israeli companies (listed below).

Argaman is a Jordan Valley settlement off route 90, which is the road running north from Jericho, through the valley to the Galilee. It was established in 1968 on land seized by military order after the occupation and forced expulsions of 1967. The establishment of the colony was funded by the World Zionist Organisation. The settlement spans almost 9,500 dunums, but houses only 175 Israeli settlers in a fenced residential settlement. The majority of Argaman is reserved for its agricultural area.

Fittingly, the settlement is named after two soldiers who died during Israel’s brutal conquest of the valley.

Argaman is close to the Palestinian village of Zubeidat. Zubeidat was classified Area B during the Oslo accords, technically meaning that there is joint Israeli and Palestinian control. In reality, although the village is better off than neighbouring Area C villages, the classification stunts the natural growth of the village by placing a rigid border on the built-up area.

The Palestinian farmers of Zubeidat are denied the water necessary for growing their crops by the occupation. The food grown in Zubeidat is denied access to the international market, and Palestinian fruit and vegetable stalls selling local produce along Route 90 are often demolished by the Israeli military.[1]

Corporate Occupation has documented repeated incidents of Palestinian child labour inside Argaman. All of the Palestinians working inside Argaman that we have spoken to have reported that they are paid below the Israeli minimum wage, and not allowed to unionise.[2]

We photographed the following companies’ packaging inside Argaman:

During our visit to Argaman settlement we managed to obtain a box of fresh basil being packaged for export by Sole Fresh Agricultural Produce.

The box was mislabelled as ‘Produce of Israel’. There is writing in both French and German on the box, suggesting that Sole might export to both of these countries.

Sole is an Israeli company headquartered in Lod, within the borders of Israel.

A packing house in Argaman was packaging grapes for Tali Grapes on a large scale. Tali Grapes is an Israeli company headquartered in Moshav Lachish in the Naqab desert, inside Israel’s 1948 borders.

News sources confirm that Tali Grapes source from the Jordan Valley. The company has export markets in Singapore and Sri Lanka.[3]
Website: taligrapes.co.il

We found April Herbs ‘Rocolla Lux’ packaging in a warehouse in Argaman settlement. April Herbs is an Israeli company based in Nitzanei Oz. The company exports herbs, greens, vegetables, fruits and edible flowers to Russia and Europe (including Cyprus).

The company states that it works with “15 farms within the borders of the State of Israel.”[4] The company partners with Enigma, a Russian export company.

Beit Ha’arava is an Israeli colony in the southern Jordan Valley, close to the Dead Sea. It is situated close to the Route 90 and Route 1 highways.

Established in 1980, it now has 222 residents.[1] Corporate Occupation has found evidence of child labour on the land of Beit Ha’arava, and of workers being paid well below the Israeli minimum wage.[2]

The illegal settlement has been growing steadily over the past 5 years.[3]

We found packaging for peppers branded ‘Shoval Arava Marketing’ in Beit Ha’Arava settlement. The peppers were wrongly labelled as ‘Produce of Israel’ and ‘Origin: Arava Valley’.

According to its LinkedIn profile, Shoval Arava Marketing is a small company set up by growers in the Arava region, within Israel’s 1948 borders. However, it seems that it is also sourcing peppers from the illegal colony of Beit Ha’Arava in the Jordan Valley. The company is based in Ein Yahav. [4]

‘Kibbutz’ Gilgal is a small fenced residential settlement of 180 people. It is surrounded by barbed wire and watch towers, in stark contrast to the serene and peaceful landscape around it. Gilgal is flanked by fields of hundreds of date palms stretching west to the mountains. This area, west of Route 90, is a closed area for Palestinians, save for those working for the settlement. Gilgal was established in 1970 and has a population of about 160 on 1,400 dunums* of land.[1]

As of 2018, there were plans underway to expand the illegal settlement, annexing even more Palestinian land.[2]

The settlement of Mehola is situated in the northern Jordan Valley. It is comprised of a gated, fenced residential settlement and an agricultural area. The agricultural area is close to the Palestinian village of Ein al-Beida. Palestinian workers, including children, work in the fields and packing houses. Workers are routinely paid below the Israeli minimum wage, and have no contracts or health insurance. There have been documented incidents of employers in Mehola falsifying wage slips in order to appear to be paying proper wages.

Mehola has an area of 5,000 dunums and a population of 351 people. It falls within the Bik’at HaYarden Regional Council of settlements. It was established, in 1967, on Palestinian land from the Tubas region. A large proportion of the produce in Mehola is marketed as ‘organic’ for the export market.[1]

AG Ankor is an Israeli company based in Karmiel, within Israel’s 1948 borders.

The company deals in herbs, fruits and vegetables, as well as greenhouses. Its main export markets are the US, UK and Russia.[2]

We found fresh herbs being packaged for AG Ankor inside a packing house in Mehola.

We found Bless SR packaging inside a packing house in Mehola. We were also able to photograph a delivery note, documenting the delivery of herbs to Bless SR in Israel. The herbs were being erroneously labelled ‘Product of Israel’.

Bless SR exports to the UK, Russia, Holland, Canada, Germany, the US, France, and eastern Asia. The company has a packing house at Tel Aviv’s Ben Gurion airport. Fresh herbs make up the majority of its business.[3]

The company is promoting itself heavily in Europe, and regularly participates in the FruitLogistica trade exhibition.[4]

Na’ama is an Israeli colony that was set up in 1982 on Palestinian land in the Israeli occupied West Bank, close to the city of Jericho. It has 100 inhabitants.[1] Corporate Occupation has repeatedly documented workers being paid below the minimum wage by the settler bosses in Na’ama.[2]

We found packaging for Hanan Pasternak peppers during our visit to Na’ama. The box was mislabelled as ‘Produce of Israel’.

Hanan Pasternak has a large farm in the Israeli colony of Netiv Ha’gdud. The company used to export to Europe in the past, but has lost that market due to the BDS movement.

Hanan Pasternak told the Times of Israel in 2014: “Palestinians [in Europe] were going to supermarkets and [correctly] labelling it themselves [as Israeli produce]. It started in Scandinavia and then spread. We used to export a lot of products to Holland and England and Germany.” Pasternak stated that the company’s only market now is in Russia.[3]

Bik’at HaYarden Regional Council has a collection of administrative and agricultural buildings on Palestinian land just north of the colony of Massua. A large date refrigeration unit was established on the land in 2010. 1 The building is used as a storage unit for dates from the surrounding settlements before export. The refrigeration unit has been operated by several private companies, but is now managed by the Settlement Regional Council. When we visited in 2018, it was proudly displaying a banner celebrating ‘50 years of settlement of the Jordan Valley’. Bik’at HaYarden Regional Council has jurisdiction over all the illegal Israeli colonies in the Jordan Valley.

When we visited Bik’at HaYarden Regional Council in 2018, we found labelling for Field Produce Medjoul dates in the packing area of the refrigeration unit. According to the website, “products offered by the company include in-shell peanuts and peanut kernels, sunflower seeds, chickpeas, almonds and dates, which are sold all over Europe and in Israel.”

The company also supplies nuts and seeds. According to its website, “Field Produce is very well known in Europe, where the company has marketed premium peanuts and sunflower seeds for many years. In recent years, we have started exporting dates and almonds to Europe, under the same successful brand name.” [2]

In an interview with the Fresh Plaza trade website, Avi Dagul of Field Produce said: “Field Produce Marketing’s main export destinations are west and northern Europe – the Netherlands, France, Germany, Scandinavia, Italy, and Spain. We are very strong in the Spanish market.”

He continued, saying that “the company also exports to other parts of the world – such as Singapore, Australia, Eastern Europe and Turkey, where we have a strong presence as well .”

The company claims that its Medjoul and Bahri date exports have increased by 10% in recent years.[3] Field Produce is based in the Jordan Valley.[4]

Goldman Farms has a packing house opposite the Bik’at HaYarden Regional Council’s central refrigeration unit. The packing house is run by settlers. We could not find any more information about this packing house. It seems to be a small settlement company.

Since 2018, there has been a plan to build 55 new housing units in Tomer.[2]
Over the past ten years, Corporate Occupation has documented the systematic under-payment of workers in Tomer, who are routinely paid below the Israeli minimum wage. The settlement also employs children below the age of 16, often working in dangerous conditions. As with all the Jordan Valley settlements, Palestinian trade unions are banned from organising the workers.[3]

We found boxes of Cherriessa peppers being loaded onto a lorry when we visited Tomer in summer 2018.

Cherriessa, trading under the slogan ‘From Farm to Market’, is a family owned business which sorts, packages and exports vegetables from Israel to Europe. According to Cherriessa’s website, the company was founded in 2009 to export produce from ‘The Saada Family Modern Farm’.[4] Cherriessa exports most of its produce to Russia.

On our previous research visit in 2013, Corporate Occupation found evidence that Cherriessa was packaging tomatoes in Tomer, and mislabelling them as ‘Produce of Israel’.[5]

Corporate Occupation photographed boxes of red peppers loaded onto a truck ready to leave Tomer settlement. Dani Maimoun is a grower based in Tomer, exporting bell peppers and spring onions. In 2007, the business was worth £1.25 million, with 80% of produce going to the UK and Europe. 6 However, the company’s exports have since been hit hard by the BDS campaign.[7]

Haananas is a small settlement company selling pineapples. The company has a packing house and shop inside Tomer settlement’s agricultural area.