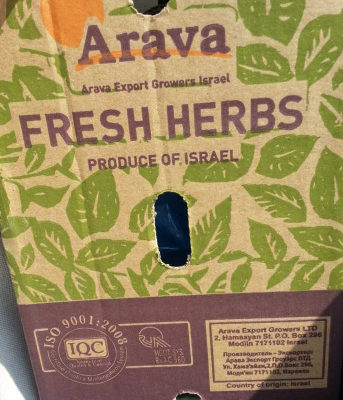 Arava Export Growers is one of Israel’s biggest agricultural companies. It was established in 1991 as a cooperative of growers from the Arava region.

The company exports produce grown o settlements in the West Bank. Arava supplies fruit, vegetables and herbs worldwide, including through its Dutch and American subsidiaries.

The company used to have a UK partner company, but this partnership was broken in 2012 after protests.[1]

The company has applied for GlobalG.A.P. certification to export aubergines[3], peppers[4] and cucumbers[5] to UK and EU outlets in 2020.

Arava in the West Bank

There is plenty of evidence that Arava exports products from settlements in the West Bank. During two research trips to settlements in the occupied Jordan Valley in 2018, Corporate Occupation found Arava products being packaged in the settlements of Tomer and Mehola. In Mehola we photographed Arava herbs being packaged for export to Russia. The carton was labelled ‘Product of Israel’, despite the fact that the packing house is situated in occupied Palestine.

In the past, Corporate Occupation has photographed Arava packing houses in the settlements of Mehola, Gilgal, Netiv Hagdud, Ro’i and Beit Ha’Arava.

Arava in the Gaza Strip

In 2013, Corporate Occupation documented Arava’s export of strawberries and tomatoes from the Gaza strip.[6] This amounted to profiteering from the siege conditions placed on Gaza. The Israeli siege prevents Palestinian companies from independently exporting produce from the Strip. At that time Arava was exporting the majority of Gaza’s strawberries.

Unfortunately we do not know whether the company is still maintaining this trade.