by Adri Nieuwhof,
Photos by Activestills: Keren Manor, Anne Paq and Oren Ziv
Over the past few years the use of Volvo equipment in Israel’s demolition of Palestinian homes and the construction of the wall has been documented. Mr. M. Wikforss, Vice President of Media Relations & Corporate News of Volvo Group, response to an article in The Electronic Intifada of 2 July 2007, was that Volvo Group does not condone the destructive use of Volvo equipment and would regret the use of its products for destructive purposes. Wikforss claimed, “we do not have any control over the use of our products, other than to affirm in our business activities a Code of Conduct that decries unethical behavior.”
In its advisory opinion on the wall of July 2004, the International Court of Justice (ICJ) reaffirmed the illegality of the construction of the wall and Jewish settlements in the occupied Palestinian territories, including East Jerusalem. According to the ICJ construction activities should stop immediately and the wall and settlements should be dismantled. Palestinians who lost property because of the illegal construction activities should be compensated for their loss.
The Volvo Group Code of Conduct states that “within its sphere of influence, the Volvo Group supports and respects the protection of internationally proclaimed human rights and ensures that it is not complicit in human rights abuses.”
The use of Volvo construction equipment in illegal activities is a breach not only of international law, but also of Volvo’s own Code of Conduct. Volvo Group is informed about the illegal practices of Israel in the occupied territories, and knows the Israeli military use Volvo equipment in a destructive way. It is not sufficient to sit back and refer to a Code of Conduct. Volvo should be concerned and rather investigate how construction equipment can end up this way in the hands of the Israeli military. The company should enforce the Code of Conduct in its dealings at all levels. Volvo Group’s Code of Conduct becomes a meaningless piece of paper, when the company is not acting upon it. Meanwhile, the list of documented use of Volvo equipment in illegal activities of the Israeli forces is growing.
In January 2007, Volvo equipment was used in home demoltions in Silwan, a neighborhood of East-Jerusalem. Activestills photographer Keren Manor took a picture of the equipment:

In March 2007, Volvo equipment was used in several home demolions , including in the demolition of Abu Snena’s house in Wadi-Qadum neighborhood in East Jerusalem.

On 25 June 2007, the unrecognized Bedouin Palestinian villages Atir and Um Hayran in the Naqab (Negev) were attacked by more than 1,500 Israeli soldiers. Hussein al Rafay’a, head of the Regional Council for the Unrecognized Villages (RUCV) in the Naqab, was arrested because he tried to block the Israeli forces and machinery from approaching the villages and its inhabitants. His colleague managed to take pictures of the demolitions, showing how the big, powerful, yellow Volvo bulldozers razed the homes of the Bedouin villagers to the ground (see picture below) .At least twenty houses were demolished and properties were confiscated, leaving over 150 men, women and children homeless.

On Monday 12th October 2009, Israeli bulldozers accompanied by dozens of armed forces arrived at the house of the Teriaqi family in Beit Hanina. Within two hours they demolished the home of the family in a pile of rubble. Next, the bulldozers and their armed entourage convoyed to a neighboring fifty square meter oven bakery that belongs to Mr. Jehad Siam. The same procedures were followed; the area was sealed and evacuated, anybody who showed any signs of resistance would be detained and the way was cleared for the Volvo bulldozers to carry out the demolition. (Report of the Coalition for Jerusalem 12 October 2009)
In April 2010 Volvo equipment is seen being used by the Israeli forces to prepare the construction site for the wall around al-Walaja. The residents protested the confiscation and demolition of their property. The Israeli settlements of Har Gilo and Gilo, established in the 1970s, are built on land confiscated from the village. While Israeli forces try to silence the protesters with harsh measures, Volvo and Caterpillar equipment is used by the Israeli forces in the illegal construction of the wall on the village’s land.

The Volvo Group is involved in another activitiy in Israel. Through its Volvo Buses branch, the Volvo Group is providing armored buses to transport Israeli settlers in the Occupied Palestinian Territories (OPT). Volvo Buses is co-owner of Merkavim Ltd., an Israeli transport technology company. Another shareholder in the company is Mayer’s Cars and Trucks, the exclusive Israeli representative of companies from the Volvo Group. According to Merkavim’s website, the company was chosen by Volvo as “its major body builder in the Middle East.” However, the “Who Profits from the Occupation?” project reported that Merkavim manufactures an armored version of Volvo’s Mars Defender bus for the Israeli public transport company Egged. Egged uses the Mars Defender to provide bus services for illegal settlements in the occupied West Bank. The 2004 advisory opinion of the International Court of Justice on Israel’s wall in the West Bank confirmed that settlements violate Article 49 of the Fourth Geneva Convention. Article 49 explicitly states that the Occupying Power is not allowed to deport or transfer parts of its own civilian population into the territory it occupies. Bus services facilitated by Volvo subsidiarys facilitate the maintaining of illegal settlements in the OPT
Adri Nieuwhof is a conultant and human rights advocate based in Switzerland 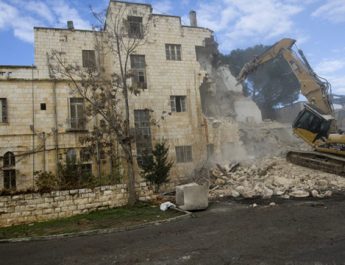 Volvo and CAT Machines used in Demolition of Shepherd Hotel