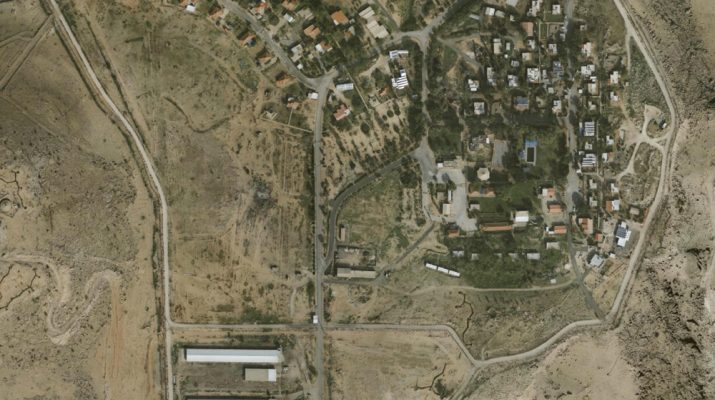 Argaman is a Jordan Valley settlement off route 90, the road running north from Jericho, through the valley to the Galilee. It was established in 1968 on land seized by military order after the occupation and forced expulsions of 1967. The building was done under the auspices of the World Zionist Organisation.[1] The settlement spans almost 9500 dunums and houses around 175 Israeli settlers in a fenced residential settlement. The majority of Argaman is reserved for its agricultural area.

Fittingly, the settlement is named after two soldiers who died during Israel’s brutal conquest of the valley.

Argaman is close to the Palestinian village of Zubeidat. Zubeidat was classified Area B during the Oslo accords, technically meaning that there is joint Israeli and Palestinian control. In reality, although the village is better off than neighbouring area C villages, the classification stunts the natural growth of the village by placing a rigid border on the built up area.

The residents of Zubeidat suffer from chronic water shortages and, since the seizures of 1968, lack of agricultural land. It is forbidden for the residents of Zubeidat to drill wells or construct water reservoirs. Building restrictions in Zubeidat are often enforced through house demolitions – for example, in 2006 six cattle sheds were demolished.[2]

Those farmers who do have land to farm around Zubeidat are often unable to access local markets for their food due to Israeli closures. As a result many farmers sell their goods from makeshift shacks at the side of Route 90. These shacks have been subject to demolitions by the IOF.

The settlement of Argaman encounters none of these problems. Settlers living in Argaman are offered government loans, free houses, subsidised and plentiful water and electricity. Argaman grows roses, herbs and grapes for export.

Corporate Watch visited Argaman early in the morning one day in May 2010. We were refused entry to the residential settlement but were able to access the agricultural area.

The ubiquitous Carmel Agrexco packing houses were apparent everywhere in Argaman. In one packing houses herbs were being packed into ‘Carmel Ecofresh’ boxes. Two young Palestinian boys were arriving to work at the packing house – when we asked their ages they told us they were fifteen and sixteen.

Azrom provides some of the greenhouses inside Argaman. The company boasts that it distributes greenhouses in the USA, Guatemala, South Africa and Italy – a list of there distributors can be found at http://www.greenhouse.co.il/azrom.html 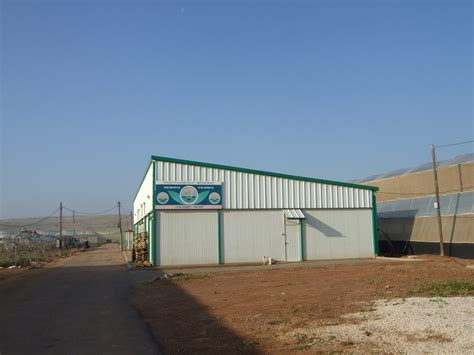 Ada is an Israeli agricultural export company with a HQ at Kfar Truman in Central Israel. The company has subsidiaries in the Netherlands and the USA. Much of the company’s produce is organic, certified through the Israeli certification body, Agrior. The packing house in Argaman is an organic packhouse run by Yoram Ozeri.

Ada products are sold in the UK under the brandname ‘Adafresh’.

Netanuel Sinuani, an organic grower in Argaman, is a member of the the Israeli Bio-Organic Agriculture Organisation (IBOAA), www.organic-israel.org.il. IBOAA boast that it comprises 500 Israeli growers. Apparently, “IBOAA’s activities are focused on the promotion of a human and animal friendly environment”.

Corporations in the East Jerusalem settlement of Pisgat Ze'ev