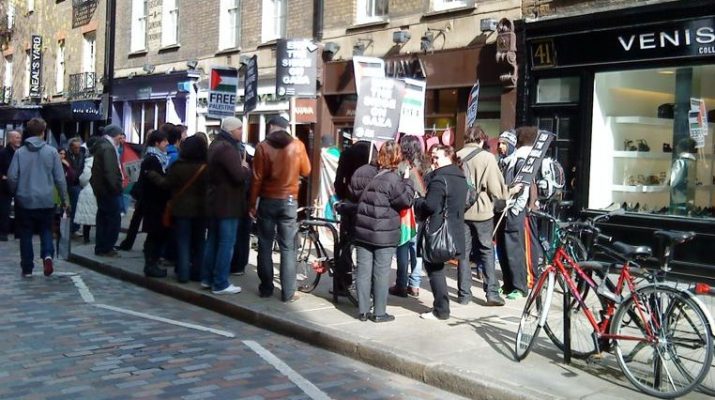 On Monday 21st November 2010 two campaigners locked themselves inside the Ahava Dead Sea laboratories store in Monmouth Street, Covent Garden. Ahava is an Israeli settler company, owned by the illegal settlements of Kalia and Mitzpe Shalem. The London store has admitted that all the products stocked in the shop, barring tweezers from China, are manufactured in their factory in Mitzpe Shalem.

This is the fifth time that the store has been blockaded by activists since 2008. Over the weekend the Zionist Federation had staged a ‘buycott’ in support of the store. A handful of zionists were given a discount on Ahava products, however rumour has it that their comrades from the English Defence League (EDL), not known for their use of skincare products, still balked at the prices.

On Saturday night boycott activists glued the locks of the store, forcing them to close on Sunday while a locksmith was called.

The campaigners who blockaded the store claim that Ahava’s business is unlawful as the shop’s goods are, misleadingly, labelled made in Israel and are manufactured on illegally occupied land. A previous group of blockaders were acquitted during summer 2010 after Ahava management did not turn up to give evidence, perhaps concerned the case would go against them.

The international campaign against Ahava was the subject of an investigation at the Russell Tribunal on Palestine. At the press conference following the tribunal ‘juror’, Michael Mansfield QC, noted the occupation of Ahava in Covent Garden and “encouraged civil society/BDS actions that can achieve corporate accountability.”
see http://freepalestinefortnightlydemo.wordpress.com/ and http://jfjfp.com/?p=18864

One thought on “Ahava blockaded for the fifth time”