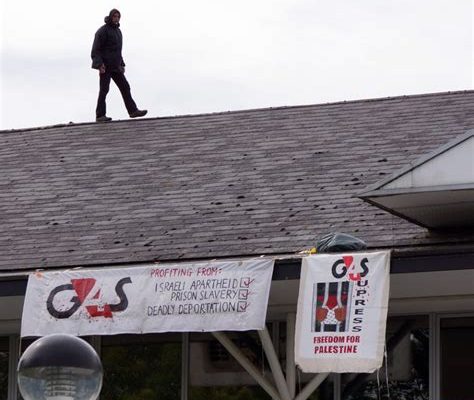 The two activists who occupied the roof of G4S’ HQ near Crawley for eight hours on 2nd July 2012 appeared in court today to plead guilty/not guilty to an ‘aggravated trespass’ charge under Section 68 of the Criminal Justice and Public Order Act 1994.

Both defendants pleaded ‘not guilty’ on the basis that, among other things, the activity they are accused of obstructing/disrupting is unlawful (in reference to G4S’ contract with the Israeli Prison service and services to Israeli settlements and military checkpoints, the use of unlawful restraint techniques in immigration detention centres and so on).

Section 68 states that a person commits the offence of aggravated trespass if s/he trespasses on land where persons are engaged in a lawful activity with the intention of intimidating those persons, obstructing or disrupting that activity. The draconian bail conditions that had been imposed by the police (not to trespass anywhere in the UK, not to enter the borough of Crawley, and not to enter any land or building associated with G4S anywhere within the UK) were varied by the court. The first two conditions were removed altogether and the third was limited to the boundaries of the G4S HQ concerned.

The court seemed to agree with the defendants that the original condition meant they could not enter or use numerous public and private buildings “associated with G4S” (where the company provides security, for example), from banks, hospitals and stations to prisons and possibly the court building itself. A court hearing date was set for the 3rd and 4th December 2012 at Horsham and Haywards Heath magistrates courts respectively.