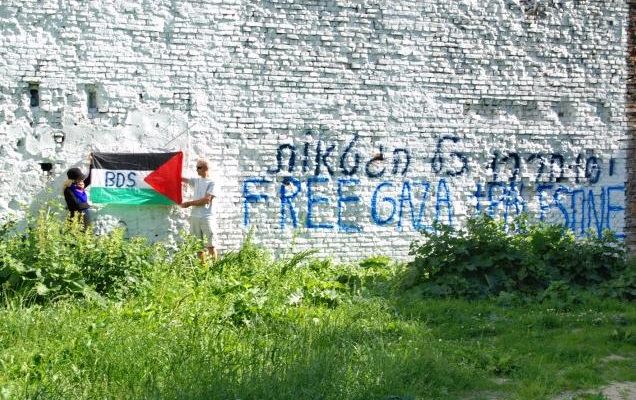 This Corporate Watch op-ed was first published by Electronic Intifada on the 20th of March 2013.
For the last three and a half years the UK-based research cooperative Corporate Watch has been running a project (Corporate Occupation) tracking corporate complicity in the occupation of Palestine.

After a research visit to Palestine in 2010, we wrote a handbook for activists who want to take action in line with the Palestinian call for boycott, divestment and sanctions (BDS) against Israel. In January and February this year, we returned to Palestine to find out what was new on the ground.
Much of Corporate Watch’s research has focused on entering Israeli settlements, seeing how they are financially sustaining themselves, what companies are operating or providing services there and how they are facilitating apartheid and colonization.

A lot of people have asked us how we accomplish this. Although we do have a few simple tricks up our sleeves which have helped us in our research, basically it just requires a cover story and a lot of luck. We have explained our presence in the settlements by pretending to be confused tourists, curious students or enthusiastic Zionists, but, more often than not, our investigations have proved surprisingly easy and all of them could be replicated by other BDS activists.

For example we successfully established that one company, EDOM UK, was working with the settlements by turning up at export packing houses posing as travelers in search of organic fruit and vegetables to buy. We have often had to travel for hours to remote places, not knowing if we will find anything useful when we get there and have accepted the relatively small risk of running into problems with the authorities or encountering violence from settlers.

We have been detained a few times and have had a few threats from angry settlers. However, the net results of our research — a wealth of new information for the BDS movement — has definitely outweighed any difficulties we have faced.

We have also concentrated on providing contextual information for BDS campaigns on the effects of corporate activities on Palestinian communities living under occupation. By documenting settlement expansion and by interviewing people in communities threatened with ethnic cleansing, we endeavor to provide the context needed for BDS campaigners to win the arguments which inevitably arise when targeting the profits of complicit firms.

During the last five or so years, a huge amount of work has been done by Who Profits? (a project run by Palestinian and Israeli women), Corporate Watch and local BDS groups to document and catalogue as many of the companies profiteering from the occupation as possible. As a result, the movement now has a lot of resources to build campaigns from.

Although most major international corporations working in the area may be known by now, there is still a lot of work to be done around less obvious organizations, and often these are only found by going out there and looking for them.

One example is Christian Friends of Israeli Communities, a relatively small “charity” with offices in Israel, the US, Germany and the Netherlands. Set up in opposition to the Oslo accords in 1995, Christian Friends is ideologically motivated and supports the settlements though fundraising for projects in the West Bank and encouraging Christian tourists to visit the settlements.

The first time we came across this charity was in 2010 when we spotted a “planted with the assistance of CFOIC” sign by a new olive grove in the Jordan Valley settlement of Maskiot. Maskiot is home to many of the Gush Katif settlers, who used to live in Gaza, and was recognized by the Israeli government as the first new settlement in the Jordan Valley for a decade in 2009.

Al-Maleh, the Bedouin community next to Maskiot, faces increased settler harassment and frequent house demolitions as its existence on the land is threatened by settlement expansion.

There is no doubt that any group supporting illegal settlements is complicit in the forced displacement of Palestinians from their land. In the UK, Christian Friends has recently been dropped by World Action Ministries, a charity which used to handle its UK donations, after it had received calls from the public about Christian Friends’ support for the settlements.

World Action Ministries told Corporate Watch that “this made us immediately feel very uncomfortable bearing in mind the advice being given by the United Nations and other bodies at the time [about involvement in the settlements].” Christian Friends has confirmed that donations to it from the UK are now handled by a Christian group called Stewardship Services (UKET).

If BDS activists in Israel, the US, Germany, the Netherlands and the UK collectively challenged Christian Friends’ “charitable” donations to settlements we might be surprisingly effective, and educate the public on the way.

Of course, Christian friends represent only one kind of involvement in the occupation. The fact is that the occupation is everywhere in Palestine and any situation you find yourself in can present an opportunity for information gathering of some description. We often discover companies to add to the boycott list by pure chance.

On our recent research trip we attended a demonstration against Israel’s wall in the West Bank and were arrested. As the police entered our details into a database, we were taking mental notes of the Sagem finger-print scanners, Canon camera system and Garrett metal detectors installed in the police station in the settlement of Shah Binyamin.

Finding new BDS targets and updated information on company activity are not the only reasons why research on the ground is important. It is also essential that existing international campaigns work closely with, and listen to, the people in Palestine who are directly affected by the companies targeted by BDS campaigns.

There is a growing BDS campaign against the British-Danish company G4S targeting its provision of equipment and services to the apartheid wall, the Israeli Prison Service and the settlements. As well as conducting research into G4S’ activities in the settlements, we carried out a series of interviews with Palestinians who had been in the jails where G4S provides equipment and services. Many of them gave us messages to send to the international BDS movement. Corporate Watch will be publishing these interviews in the coming weeks.

Companies which are at the receiving end of boycott campaigns are becoming increasingly public relations-savvy, and are putting a lot of effort into spreading disinformation regarding their activities. The most obvious example of this is SodaStream, a maker of fizzy drink machines, which has gone so far as to release a short video, Building Bridges – Not Walls, to show how “beneficial” its business in the West Bank is for the region.

On this visit we wanted to get the story from the communities around Mishor Adumim, the Israeli-controlled industrial zone where SodaStream is located. SodaStream’s main argument in favor of its investment in Mishor Adumim is that it provides essential employment for Palestinians in the area. However, you only have to take the example of Khan al-Ahmar, a Bedouin community next to Mishor Adumim, to debunk this myth.

Khan al-Ahmar is located in Area C, a zone covering more than 60 percent of the West Bank, where Palestinians are not allowed to build anything. The community is fighting a plan by the Israeli government to forcibly relocate it. If the plan is implemented, the Bedouins would be removed from the area where they have lived since the 1950s.

Far from providing jobs for the people there, the factories in Mishor Adumim are the reason their livelihood has been taken from them, built as they are on land previously used as grazing areas.
According to five interviewees in the wider Khan al-Ahmar area (Abu al-Helweh, Abu al-Mihtawish, Abu Fellah and Kurshan), people from these communities no longer get permission to work in Mishor Adumim at all.

This rule was introduced as a collective punishment by the “regional council” for the settlement after the communities started building a school for their children in Khan al-Ahmar in defiance of the building restrictions imposed by Israel in Area C.

By complying with this order denying work permits to Palestinians from the area most affected by the expansion of the settlements Maale Adumim and Kafr Adumim, SodaStream and the other factories operating from within the industrial zone are directly encouraging the ethnic cleansing of the area.

“They destroyed our lives”

As one man who now lives near the Jerusalem suburb of Abu Dis after being displaced from the area in 1998 put it:

“We are not allowed to go near them [the factories]. They took our livelihood to build them and we got evacuated for them to build their factories. After they built them there were no resources to live from for us. The gains are nothing compared to what was lost. They destroyed our lives and then gave a few people a job. It is nothing.”

SodaStream’s PR strategy relies on putting across an impression of openness. The company has paid for journalists to visit its Mishor Adumim factory and is planning to fly over Member of Parliament and the UK Conservative Party’s Mike Weatherley, whose constituency is close to the Sodastream shop in Brighton.

We decided to call the firm’s bluff and offered to visit the factory on our own expense. SodaStream, clearly not keen to answer difficult questions, replied saying that, regrettably, it did not have capacity to facilitate our visit.

Many companies take a very different approach to SodaStream and attempt to minimize or hide their role in working with the settlements. When corporate complicity in the occupation is exposed, PR executives respond by giving the same excuses — either that the companies were not aware that this was going on or that it was a temporary arrangement which came about through some novel circumstance that will not happen again.

When we were leaked evidence that the own-brand agricultural produce stocked by the British supermarket chain Morrisons was being packaged in an illegal settlement, we were told that this was a short-term arrangement necessitated by the lack of a suitable packing house inside Israel.

The lesson to be learned from this is that companies are very unlikely to consider justice and freedom for Palestinians of their own accord and that it is up to all of us to continue to find ways of obtaining and exposing this information. If we don’t, companies will continue to take advantage of the captive workforce provided by the occupation to make a fast buck.

The power of BDS is that everyone can contribute. If you are traveling to Palestine, consider spending time investigating those making money out of the occupation. If campaigning at home, use evidence gained by others and your own research to challenge companies locally. Remember: the fact that so many corporations now go out of their way to try to disassociate themselves from what we find means that we have come a long way already.

Therezia Cooper and Tom Anderson are pen names for two boycott, divestment and sanctions activists and researchers. They have volunteered with various solidarity groups in Palestine and are the authors of Targeting Israeli Apartheid: A Boycott Divestment and Sanctions Handbook published by Corporate Watch.

Corporate Watch’s Palestine project can be followed at corporateoccupation.org or via twitter @corpoccupation

Ahava blockaded for the fifth time