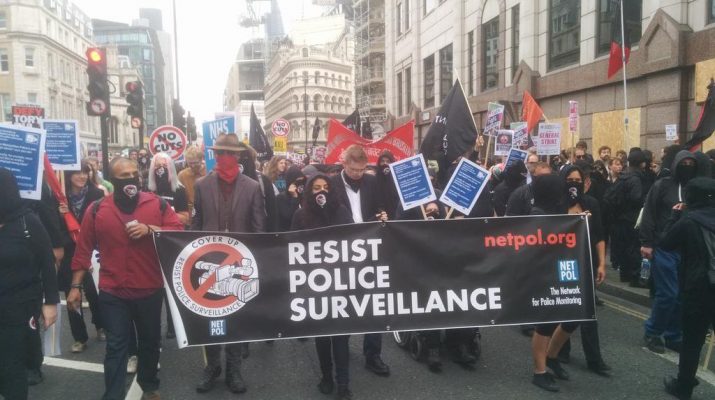 Tom Anderson, a researcher for Corporate Occupation, has been stopped under Schedule 7 Terrorism Act powers and was followed by a police Forward Intelligence Team after leaving a demonstration last week. In this article Tom, talking from the perspective of an independent media journalist involved in anarchist, anti-capitalist and anti-corporate movements, urges these movements to resist police surveillance and harassment with a renewed militancy.

The police surveillance experienced by members of the Corporate Watch cooperative over the past year is indicative of a recent change of police tactics. A new fightback against the police Forward Intelligence and Liaison teams is needed if our movements are to remain effective.

A decade ago police were using the same tactics of following and harassing activists that were used against participants in the DSEi mobilisation last week. FITs were a regular presence outside political meetings and anarchist social centres in the run up to grassroots confrontations with corporate power (see here for example). Police spotters singled out activists to harass using ‘capture cards’, sheets of photos of political activists cherry-picked for police attention. Those who were targeted encountered a highly personalised form of repression which, even when those who were harassed received solidarity from within their movements, could take a heavy toll.

In response people organised themselves to sabotage the FITs by physically blocking their cameras, handing out information on police tactics as well as bust cards and masks, and educating each other about the importance of refusing to comply with police requests to negotiate and communicate with them. ‘FIT Watchers’ were a regular presence at demonstrations, often enabling people to act without being filmed by FIT cameras.

A ‘Freedom to Protest’ movement sprang up, providing information about how to counter police tactics, linking together different communities experiencing police repression and organising actions which refused to comply with state control and challenged police power. A campaign of civil disobedience aimed at making the Serious Organised Crime and Police Act’s restrictions on protest outside parliament unworkable ended in the repeal of that part of the act. At the 2007 and 2008 Camps for Climate Action, police were prevented from entering the camps.

At the same time, activists mounted legal challenges to many police powers. A successful appeal to the European Court of Human Rights against police use of Terrorism Act stop and search powers at the 2003 DSEi protests caused the suspension of the use of this power. Those targeted with injunctions under the Protection from Harrassment (PHA) act refused to surrender when bullied through the court process, and have challenged the effectiveness of the PHA as a tool against anti-corporate campaigners (for details see the Smash EDO campaign film ‘On the Verge’, SchNEWS’ coverage of the SHAC injunction cases and details of the Camp for Climate Action’s injunction battle).

At the same time, repeated challenges to detention without charge and control orders have resulted in the dilution of these powers. Campaigns against the repression of communities, such as the Newham Monitoring Project and the Campaign against Criminalising Communities, and defendant support groups, for example for those arrested at the demonstrations against Israel’s 2009 attack on Gaza, continued to challenge police and state power.

The killing of Ian Tomlinson by a baton strike from Simon Harwood, a Territorial Support Group officer policing the 2009 G20 protests, triggered heightened press criticism of police tactics. Negative media coverage of the pre-emptive mass arrest of over a hundred people for conspiring to commit aggravated trespass at the Ratcliffe-on-Soar coal fired power station and revelations in 2010 that undercover officers had infiltrated protest movements and had been authorised to have sex with women while masquerading as activists, triggered mainstream outrage against police repression (for more info see here).

This heralded a major backlash in the mainstream media over protest policing. The police were temporarily put on the back-foot and this changed the way some mass protests were policed. The 2009 DSEi protests, for example, were eerily under-policed. Anti-militarists broke windows of corporate investors in the arms trade as police looked on passively from the sidelines. FITs’ trade mark long-lens cameras were temporarily replaced with notebooks and the following of activists became a rarity. The police released several reports after periods of internal ‘investigation’ in an attempt to give the impression of reform.

Despite these temporary cosmetic changes, aimed at presenting the impression of a new type of policing and demonstrating what might happen if the police weren’t allowed to harass protesters, overall police repression continued. The racist policing directed toward migrants and the criminalisation and harassment of those the police deemed to be ‘domestic extremists’ carried on with the continued repression of anti-fascist, anti-militarist and animal rights campaigners. Behind the scenes covert state surveillance increased.

However, what was notably scaled down was overt police surveillance. The 2010-11 student movement, the 2011 riots and the accompanying police repression marked the end of this period of relatively gloves-on public order policing. The prominence of FIT tactics at the DSEi protests suggest that the police feel ready to revert to old style harassment of campaigners during mass mobilisations too.

Another change which took place in UK policing during this period was the adoption of ‘liaison’ as a tactic. Dr Clifford Stott, an academic in the field of crowd psychology, with highly dubious left-wing credentials having written for movement publications such as the Occupied Times, was awarded consultancies to police forces such as the Metropolitan and Sussex police. Stott championed a form of policing based on the Swedish model and trained Police Liaison Officers (PLOs) to defuse confrontations between people and the police to reduce the need for the police to resort to violence.

PLO tactics are not, however, a less repressive form of policing but simply another weapon in the police’s arsenal. PLOs attempt to inhibit mass resistance by establishing points of communication within a crowd and beginning dialogue. This reduces cohesion within the crowd, allows PLOs to gather intelligence on demonstrators without resorting to FIT tactics and means that, should the police need to use more force, their officers are already deployed within the mass of the demonstration.

The DSEi protests are not the only example of the need for our movements to respond to changing police tactics. At the Balcombe Community Protection camp against Cuadrilla’s ‘fracking’ operation in Sussex unmasked blockaders routinely march symbolically ahead of the delivery vehicles for Cuadrilla. They are pushed and shoved by the police while FITs photograph demonstrators unhindere, threatening people with arrest if they try to block their cameras. Those who defy the police are picked off by snatch squads. The police Public Order Unit pulls back after pushing deliveries through and is replaced by smiling PLOs who attempt to engage the campers in conversation. Despite this police bullying, those at the camp are divided about how to respond to the PLOs. Some people even believe that the police can be won over to their cause and will join them in resisting Cuadrilla. This division has the effect that it is intended to, creating an environment where we feel as if more militant action will not be supported by those we are struggling alongside.

As we are arguing among ourselves about the merits of negotiation and dialogue with the police, the state is moving fast to restrict the space available for movement in the UK and to target communities for repression. The Protection of Freedoms Act, now passed by the UK Parliament, renews police stop and search powers under the Terrorism Act 2000 while new restrictions have been placed on protest in London’s Parliament Square. The Home Office has recently launched a poster campaign urging migrants to “Go Home”, a slogan borrowed from the National Front, while Traveller communities are again facing state repression, having been subjected to police raids last week. Anti-fascist demonstrations this year have been repeatedly met by mass arrests followed by restrictive bail conditions.

Obviously many of us have long been convinced of the need to fight back against police surveillance and that dialogue with the police only serves their ends, often people who have never confronted the police before, need to be informed.

No ‘liaison’ with state repression

Thus, the first hurdle that we must pass in renewing cohesion and solidarity and beginning a new fightback against police repression is to educate those within our movements that the police will always represent the interests of corporations, property owners and the powerful, that negotiation and liaison only plays into their hands and that their tactics can be effectively resisted through militancy and creativity. We need to reach out in solidarity to those facing repression before isolation leads to a new generation of people burning out and abandoning the struggle against corporate power.