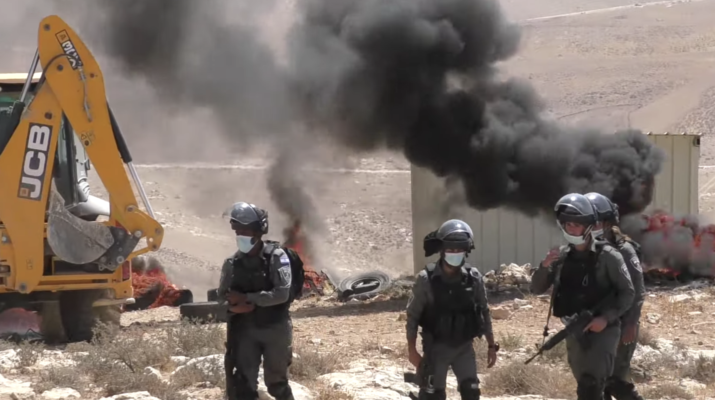 For the fourth year in a row, we have collated statistics from every demolition/confiscation of structures, destruction of water systems, or razing of land that Israel has carried out in both the West Bank and within Israel’s borders.

We have searched for photographic or video evidence of which company’s equipment (for example JCB or Caterpillar) was used in each incident in 2021. The below table shows a breakdown of the top seven bulldozers and cranes that carried out the most demolitions or confiscations of homes and other structures.  Our results also show the absolute minimum number of people that each company displaced or affected in 2021.  (Scroll left to right if viewing the table on a mobile phone or tablet).

The top three bulldozers/cranes used to demolish or confiscate structures:

The top three bulldozers or cranes used to demolish or confiscate homes:

The top three bulldozers or cranes that displaced the most people:

The top three bulldozers or cranes that displaced the most children:

The top three bulldozers or cranes that affected or displaced the most people:

The top three bulldozers or cranes that affected or displaced the most children:

We compiled our data by partnering with Israeli Committee Against House Demolitions and using its monthly Demolition & Displacement Reports. We painstakingly searched the internet for photo/video evidence of which bulldozer or crane was used for each demolition/confiscation/razing of land/chopping down of trees.

We also recorded incidents that were not on ICAHD’s list, such as the razing of people’s land, the blocking of a road, and the destruction of trees. If there was no reliable figure for the number of people affected, we conservatively estimated one person, even for a road closure that would affect whole villages. The real number of people affected by each company’s equipment is, in reality, much higher. 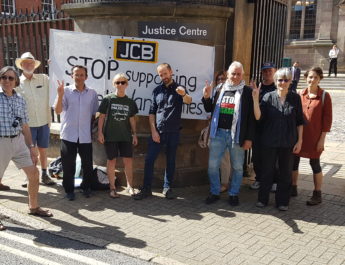